Despite Doomsday Predictions, APC Will Win Landslide in 2019 Election 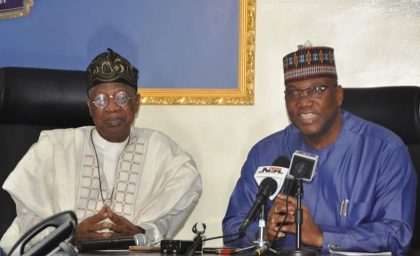 The Minister of Information and Culture, Alhaji Lai Mohammed, has said the APC will win the 2019 general elections on the basis of its performance, irrespective of the doomsday predictions by some international financial institutions and publications.

The Minister gave the assurance in Lagos on Friday when he visited the corporate headquarters of Channels Television, in furtherance of the National Campaign Against Fake News, which was launched by the Federal Government in July

He said the negative predictions against the APC-led Federal Government by an international financial institution, HSBC, and the Intelligence Unit of the Economist Magazine, were based on fake premises, thus qualifying such predictions as fake news.

“Talking about fake news, we expect that those who have been deeply affected by our policies will mount a sustained campaign against this Administration in the weeks and months to come. In fact, they have already started. We have all read that the Intelligence Unit of the Economist said the PDP will defeat the ruling APC in 2019. We have also read that the international financial institution, HSBC, said Nigeria’s economic development will be stunted if President Buhari gets a second term

“Let me state clearly that these reports are based on fake premises and, therefore, qualify as fake news. It is a psychological warfare by those who have been badly hit by our policies. For example, out fight against corruption has meant that many financial institutions, especially banks, that fed fat on the proceeds of corruption are no longer able to do that.

“Also, international publications that used to feed fat on questionable supplements paid for by the Federal Government have seen a drastic reduction in such patronage, as the Administration cuts down on frivolous spending that was the order of the day in the past.

Therefore, it is natural that these institutions and publications would not wish to see another term for this Administration,” Alhaji Mohammed said.

He said the fake news phenomenon is bound to get worse as the nation approaches the 2019 general election, because it seems to be the only weapon left for naysayers who could not fault the government on infrastructure, economy, fight against corruption, agricultural development among others.

The Minister said only Nigerians will determine who presides over the affairs of the country, not any bank or media establishment, irrespective of their influence or self-importance.

“The parents and wards of the 8.5 million school children, who are being fed every school day under our home-grown school feeding system, are feeling the impact of this Administration. The more than six million farmers, who have joined rice production since this Administration came on board, know what this government has done.

Nigerians, who are enjoying more stable electricity after power production has more than doubled, know better. The 500,000 unemployed graduates who have benefitted from our N-Power programme know that these naysayers are only thinking about themselves. So we are not bothered,” he said

On the campaign against fake news, Alhaji Mohammed sought the support of the media in driving the campaign, saying the media will become the first and the biggest victim if fake news is allowed to erode the credibility of the news business

He said the campaign has recorded a great achievement so far, even when it has not stopped the spread of fake news.

“Since launching the campaign, we have recorded a huge success. Yes, we have not stopped the spread of fake news, and we are not under any illusion that we can stop it so fast. But we have succeeded in bringing the issue of fake news to the front burner. It is now a subject of national discourse, workshops and conferences. That, to us, is a major step forward, and we thank all our partners, and indeed all Nigerians, for this achievement,” the Minister said

In his remarks, the Chairman of Channels Television, Mr. John Momoh, who expressed delight at the visit, said Channels remains apolitical and professional in its role as a watchdog for the society.

NEWER POSTVP Osinbajo and a Proper Understanding of The Restructuring Debate – Chukwudi Enekwechi
OLDER POSTHSBC Give us Our Stolen Money, Not Give us Doomsday Prophecy on 2019 Elections – Presidency