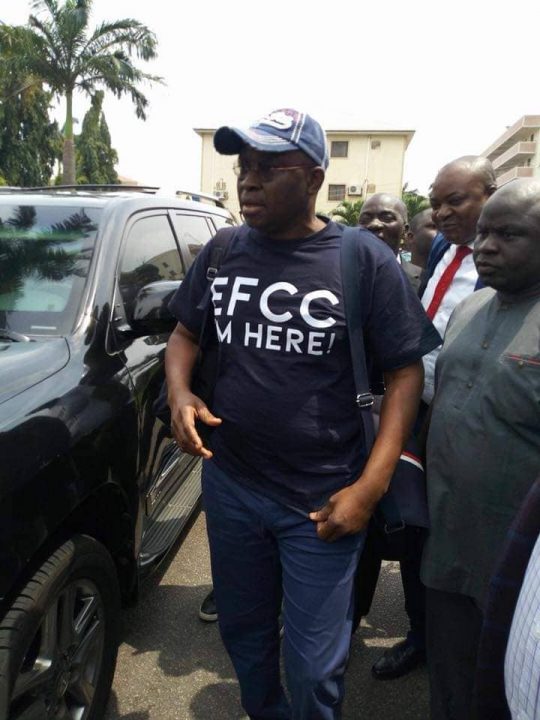 Former Governor of Ekiti state, Mr Ayodele Fayose, on Tuesday reported at the Economic and Financial Crimes Commission (EFCC) in Abuja in accordance with his promise.

The News Agency of Nigeria (NAN) reports that Fayose arrived at the EFCC Annex in Wuse II at exactly 12.59 p.m., a minute before 1p.m. he announced that he would report at the commission.

He was accompanied to the EFCC by Rivers Governor, Mr Nyesom Wike and former Minister of Aviation, Chief Femi Fani-Kayode.

Fayose’s tenure as governor ended on Monday, and he had on Saturday, presented “Hand-over Note’’ to his successor, Dr Kayode Fayemi, who was inaugurated on Tuesday.

Speaking to newsmen on arrival at EFCC office, the former governor said “I am here in line with my promise that I will be here on the 16th of October.

“And, like I said to EFCC, they should await my arrival. This morning they have been to my house; they cordoned off my street which I feel personally was unnecessary. It is unwarranted.

“When a man says he is coming, Nigerians should be given benefit of the doubt.

“I had led Ekiti, and the best I could give, I have given. Therefore, every question, whatever they need to ask today, I will be able to respond appropriately.”

He had in a letter to the EFCC sometime ago, said his term of office “to which I enjoy immunity against investigation and prosecution shall lapse by effluxion of time on Monday, Oct. 15, 2018.

“As a responsible citizen of our great country, who believes in the rule of law, I wish to inform you of my decision to make myself available in your office on Tuesday, 16th October, 2018 at 1pm.

“It is to clarify issues or answer questions within my knowledge.’’

Also speaking to journalists and Fayose was received by EFCC officials, Wike said “he wrote a letter to EFCC that he will submit himself on Oct. 16.

“He is hale and hearty and I believe that EFCC should know he is well. Our fear from the present report that we have is that he may be harmed.

“But, let Nigerians know that he came by himself to the EFCC without anybody harassing him.

“So that is why I brought him here today.”

On his part, Fani-Kayode said “we are here to stand in solidarity with our friend and brother.

“He is going in hale and hearty; we trust God and we believe he will come out the same way.

“And, as authority, we take note to the fact that the international community and the whole world is watching what is going to happen here; what they are going to do to him.”

Fayose wore a T-shirt with inscription: “EFCC, I Am Here”. He clutched a small hand bag as he was led into the commission.