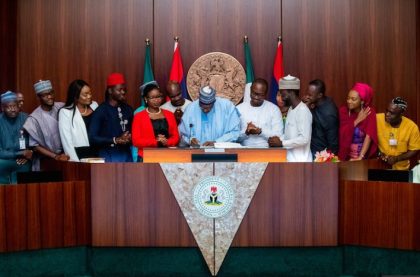 The News Agency of Nigeria (NAN), reports that Buhari on Thursday, May 31 signed the bill into law.

The Chairman of NYCN in Ebonyi, Mr. Sampson Aligwe, who spoke in an interview with the News Agency of Nigeria (NAN) in Abakaliki on Friday, said that the law would open more political space for the youths to participate actively in politics.

He said the signing was a welcome development, describing it as ‘historic’ and great political milestone to the nation’s democratic experience.

He said that it was becoming a convention in many parts of the world to allow youths to take up the mantle of political leadership.

He said that France and Australia had produced two of the world’s youngest president and prime minister ever.

He said the law would spur the Nigerian youths to vie for elective positions at the various levels of political leadership.

Aligwe urged youths to explore the provisions of the new law to register with political parties and demand for equal opportunity to fly their respective political parties ‘flags in the forthcoming 2019 general elections.

“Mr. President has demonstrated enormous political commitment and love for the youths of the country by signing the bill into law.

“We the youths praise the courage and political sagacity of Mr. President and wish to pledge our unalloyed support and loyalty to the administration,” Aligwe said.

Aligwe called for `de-monetization’ of politics in Nigeria to enable the youths to effectively exploit and maximize the new law.

“The law will make little or no impact if ‘money-bag’ politics which characterized our national politics is not de-emphasized to prevent the old breed politicians from hijacking the political process and turn the youths into mere puns.”

The News Agency of Nigeria (NAN) recalls that the age limit for those seeking election into state assemblies and House of Representatives was reduced from 30 to 25.

The age limit for the Office of the President was reduced from 40years to 35 years.

The president expressed surprise that the Act retains 35 years of age for eligibility for election into offices of governors and senators, expressing hope that the provision would be revisited in future.