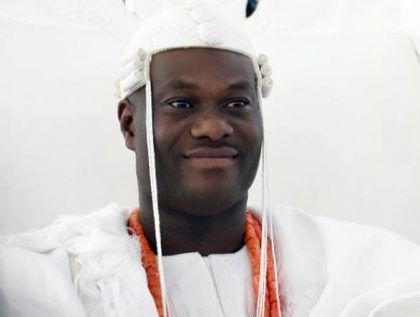 The Imperial Majesty, Ooni of Ife, Oba Adeyeye Ogunwusi, has urged Nigerian youths to support present Administration for the betterment of the country.

He commended President Muhammadu Buhari, for prioritizing youths vanguard, an exemplary good leader, that love youths and planning for their brighter future.

“No wonder why the bill “Not too young to run” that would favor youths’ future was signed into law,” he said.

The Royal father charged the younger ones to come out to the leadership position and support the old ones so as to take the country beyond.

Ooni lauded the ANN Presidential Aspirant for being courageous enough to show up the interest to contest for the post, called him to orderliness as all eyes were set on him.

“You have shown the value of the culture by taking the right step to pay homage to the first stool created by God, confirmed sitting on as ordained by God.

“God is not a man that will lie, He has remained faithful from the inception of the world, saying that God has endowed the contestant with the spirit of humility and should keep it up. he stated.

Oba Ogunwusi eulogized youths to uphold the pillar of peace, love, and unity of the country, saying this is the high time they need to gear up and fight for their future.

“We are proud of you for your braveness to come out to contest for the Presidential post at this time, am assure you that your name has been written on a platter of gold.

“Nigeria youths had been sleeping before, but I believed your coming out will reawakening them from their slumbering, reiterate them for more commitment” he expressed.

Ooni charged him to do his best and leave the rest for God, warned him against do or die political affairs, but to comport himself in a godly manner, saying God’s will is the best for him.

Earlier, Hon Fela Durotoye, the ANN Presidential candidate, appreciated Ooni for his fatherly role being played since his assertion to the throne of his forefathers, by standing at the gap for the youths in all ramifications.

Durotoye said that youths across the country and diaspora were proud of the royal father here and abroad for the growth and development brought to the lives of young and the aged.

“We have learned a lot from your exemplary leadership style which motivated me to contest for the post of President in other to deliver my colleagues from captivity” Contestant reaffirmed.

Meanwhile, Oba Gbadebo Adeniji, the Owa Oye of Okemesi, who accompanied the Aspirant to Ooni’s palace thanked the Monarch for his good gesture towards all and sundry globally.

Oba Adeniji said that Ooni has brought new Era to Yoruba land, in which all have been benefitting immensely in all spheres of lives from his wealth.

“This is the time for youths to come out en mass to renew and reform the nation.

He, therefore, called on interested candidates not to delay to contest in taking the key post at the incoming general elections.

The Owa Oye of Okemesi called on Nigerian citizenry to support all interested youths in all their aspiration.