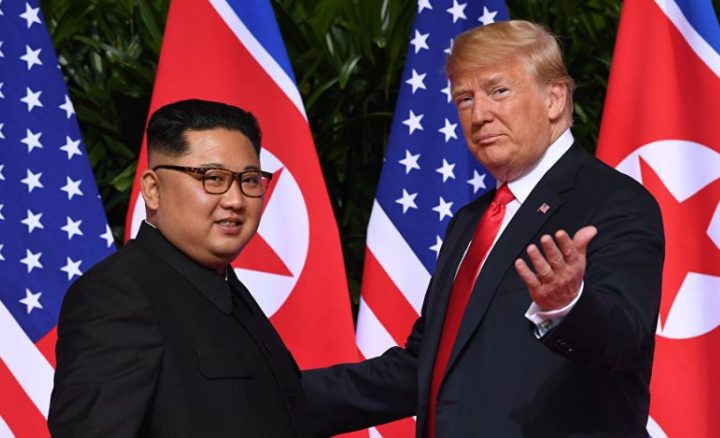 The Federal Government has applauded the outcome  of the Tuesday’s Summit between U. S. President  Donald Trump and Chairman Kim Jong Un of Democratic People’s Republic of Korea(DPPK).

The Ministry of Foreign Affairs, in a statement by its spokesperson, Dr Tope Elias-Fatile, on Tuesday  in Abuja described the  “Kim and Trump Summit,” held in Singapore as a historic achievement.

Elias-Fatile stated that the meeting which resulted to  the signing of a statement by the two leaders emphasised the establishment of new relationship between them.

According to the  spokesman, the meeting also enhanced the building of an enduring peace and stability, the denuclearisation efforts in the Korean Peninsula, as well as recovery and repatriation of Prisoners of War/Missing in Action.

”The success of the historic Summit is a demonstration of commitment by the relevant parties towards de-escalation of tension in the Korean Peninsula.

”It is a consolidation of the earlier achievement made during the Inter-Korean Summit of April 27 resulting in the Panmunjom Declaration between the leaders of the Koreas.

”Nigeria commends the bold step taken by the DPRK to dismantle the nuclear launch site as an indication of the determination to this peace process,” it stated

Elias-Fatile added that Nigeria was optimistic that the two nations would uphold the commitments made during this landmark Summit.

Nigeria, he said,  appreciated the efforts by all parties involved in the process of the successful Summit, especially the DPPK, U. S., People’s Republic of China, Republic of Korea, Japan and Singapore.

He recalled that President Muhammadu Buhari had reiterated the need for a démarche between the parties involved towards the peaceful denuclearisation of the Korean Peninsula.

”The outcome of this Summit has further strengthened Nigeria’s position over the years on the need for continuous dialogue towards the attainment of pacific resolution of conflicts and crises.

”Assuredly, Nigeria will continue to advocate and promote peaceful resolution of conflict and crises around world,” the ministry stated.