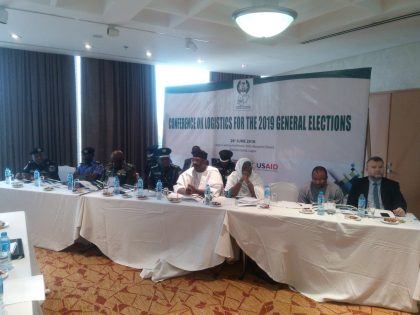 INEC organised the “Conference on Logistics for the 2019 General Elections’’ in collaboration with the European Centre for Electoral Support (ECES).

The event was equally supported by the International Foundation for Electoral Systems (IFES).

It was aimed at enhancing timely delivery of materials and personnel to polling units during the 2019 General Elections.

“It requires biggest and big time logistics operations.
“We have been required to deliver personnel and electoral materials at 119, 973 locations nationwide, and they must all open simultaneously.

“Electoral logistics is key to the successful opening of polling units at the time we have promised Nigerians we are going to do so.

“If we open all the polling units or a substantial majority by 8.00a.m., we have achieved a considerable part of our responsibility in election management; other things will fall in place,” he said.

According to him, if there are hiccups, people from different sections will complain.

Yakubu said that some polling units were hard to reach and would require use of boats.

He noted that the 2019 Elections remained 232 days, saying that the exercise would be a huge undertaking with several obstacles, some preventable and others unexpected.

The chairman said that the exercise would require careful planning, adding that deployment and retrieval of personnel and materials for elections would call for huge logistics.

According to him, any flop in logistics will be termed as an attempt to disenfranchise the citizens, hence, the need to plan adequately with logistics operators and security agencies.

“Logistics is basically public service. Some citizens may understand if we don’t open polling units at 8.00a.m., others will see it as incompetence of the electoral commission.

“The work is sensitive; so, we are determined as the election management body to ensure that polling units open at 8.00a.m. as promised.

“To be able to do so, we need contributions, support, suggestions and inputs of those who have been handling these as a matter of their respective constitutional duties,” Yakubu said.

He said that the conference was marking the last stage of planning for the elections before moving to the implementation.

The INEC boss said: “The management of the electoral process is not left for the commission; it is a Nigerian project, it is not an INEC project.

“We thought we should mobilise all our national assets from the security agencies, officials of the commission, private sector, transport unions to put our heads together so that we can better deliver this service to the nation in 2019.’’

In his keynote address, Mr David Le Notre, Project Director, ECES said: “Election is a time-bound event, which requires precision and exactitude in the deployment of sensitive and non-sensitive materials.

“For a vast geographical country like Nigeria with pockets of difficult terrains, the importance of putting in place efficient and effective logistics for deployment of personnel and election materials to service about 1,558 constituencies cannot be over- emphasised.”

Le Notre said that the conference sought to examine challenges related to the deployment of electoral personnel and materials countrywide.

Mr Seeray Jay, the representative of IFES, said that the body was committed to advancing good governance and democratic rights by providing technical assistance to ensure electoral integrity.
Jay said: “A national election is one of the country’s biggest logistics events.
“Personnel and materials must get to the polling units at the right time, quantity and in good shape for elections to take place as scheduled.

“To do this, INEC has to rely on capable and professional transport providers – public or private, ones that know, think and act like INEC.”

He called on all stakeholders to support INEC in ensuring that deployment and retrieval of materials and personnel would be timely during the elections.

Key players in the logistics industry such as the military, police, private logistics companies and bulk transporters, among others, were at the conference.
The Inspector-General of Police, Mr Ibrahim Idris, attended the event while the army, air force, navy, Federal Road Safety and Department of State Security were represented.