The People Democratic Party (PDP) on Thursday held a peaceful protest at the Headquarters of Independent National Electoral Commission (INEC) in Abuja, demanding credible elections in Ekiti and future elections. 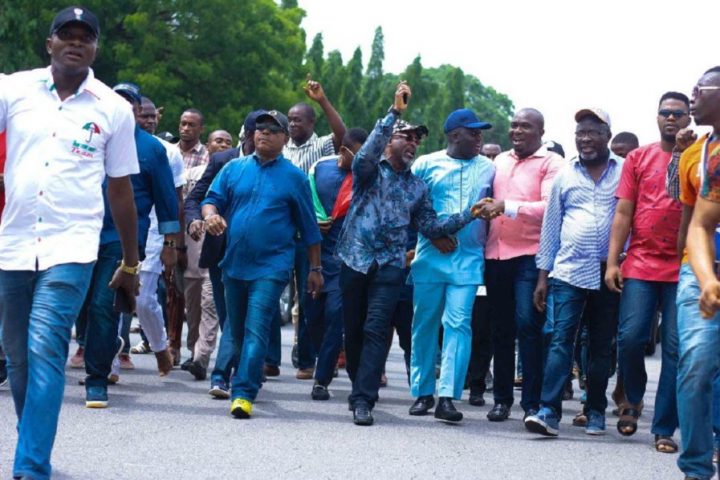 National Chairman of the party, Mr Uche Secondus, who led the protest, said that Nigerians and the international community were watching to see if there would be elections in 2019.

He said that the assurance for 2019 would be from Ekiti governorship election, scheduled for Saturday.

Secondus said that the protest became necessary following the Wednesday’s incident in Ado-Ekiti, where PDP leaders, including Gov. Ayodele Fayose and members, were harassed and manhandled during a rally.

He said that intelligence information showed that some INEC officials and some security agents were already in in collusion to rig the Ekiti election.

Secondus said that if the election was right, it would have consequences on 2019 general elections.

Speaking to INEC officials who came out to meet the protesting PDP leaders and members, he said, “We want a free and fair election in Ekiti.

“Anything short of that will be a recipe for problems and crisis and in our own judgment, there may not be elections because that will be the beginning of crisis in our nation.

“We believe that the best INEC can give to this nation is to allow free and fair election.

“We want to warn that our party will not condone and will resist every attempt to rig the election in Ekiti and coming general elections.

Right now in Ekiti, some of our leaders are being arrested, witch-hunted and the whole of Ekiti is traumatized; they are worried, wondering if they will be allowed to come out on Saturday to vote.”

Responding to questions from journalists, Secondus said the nationwide protest was successful.

Receiving a petition from the party, INEC National Commissioner, Dr Adekunle Ogunmola, re-assured the leaders of the commission’s commitment to credible election in Ekiti and in 2019.

“The mandate of INEC is to conduct free, fair and credible elections, and that is what we are committed to. I assure you that we are not going to do anything short of that,’’ Ogunmola said.

The News Agency of Nigeria (NAN) reports that the protesting PDP leaders and members had earlier been to the National Assembly with the petition.

The protest recorded a large turnout of party faithful and supporters.

Explaining why the protest was not taken to Police authorities and other security agencies, PDP’s National Publicity Secretary, Mr Kola Ologbondiyan, told NAN that INEC and National Assembly were critical to the nation’s democracy.

“The National Assembly enacts laws for the different arms of government in the country and the citizens. We believe it is the backbone of our democracy.”

Meanwhile, in Benin City, Edo, PDP members took the protest to the Police headquarters where they condemned the attack on the party members during a rally in Ado-Ekiti.

Secretary of the party in Edo, Mr Felix Imoisili, who led the protest, described Wednesday’s incident in Ekiti as “another sad development for Nigeria’s democracy.’’

Presenting a petition from the party to DCP (Operations), Mr Olatunji Ayodele, who received it for the command, he called on all concerned to ensure that the election in Ekiti was free and fair.

“One-man, one-vote and one-youth, one-vote is what we stand for.

“We are tired of bloodletting which has turned the country into a theatre of war,” Imoisili said.

He also questioned the rationale behind the deployment of 30,000 policemen and 20,000 NSCDC officers, making a total of 50,000 officers, to a civil election when people were being killed daily without security intervention.

He cited the killing of no fewer than 20 persons in Adamawa on Wednesday “without any tangible security presence’’. (NAN)