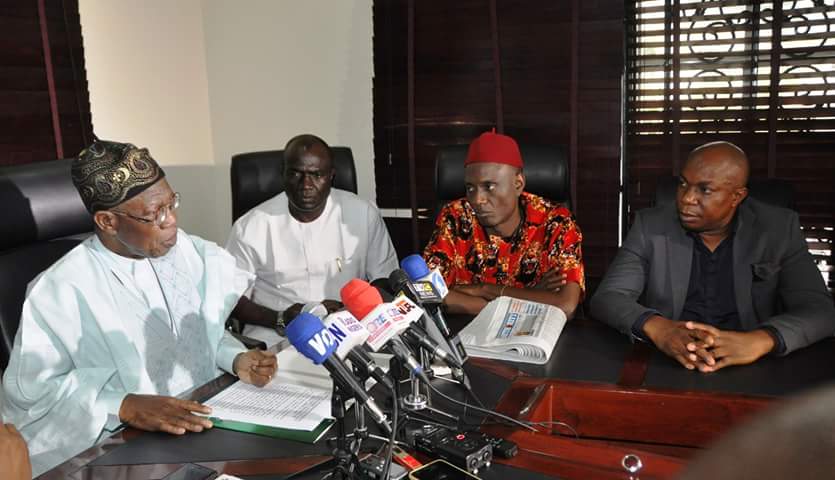 Segun Adeyemi, Abuja: The Minister of Information and Culture, Alhaji Lai Mohammed, has accused the opposition of resorting to the use of fake news as a campaign tool against the Buhari Administration ahead of the 2019 general elections.

The Minister made the remarks in Abuja on Monday when he visited the corporate headquarters of the Authority Newspapers to kick-start the media tour in furtherance of the campaign against fake news, which was recently launched by the federal government.

He said because the Buhari Administration is performing well, the political opposition believed that the best way to de-market the administration is by latching on to fake news to create religious and ethnic disharmony and throw the country into turmoil.

“With the Buhari Administration delivering on its promises to fight corruption, build the nation’s economy and tackle insecurity, the opposition has realized it will not make any impact if it takes on the Administration on that turf. So, it has decided to take the easy route, which is to use fake news and hate speech to de-market the Administration, pitch Christians against Muslims and one ethnic group against another,” he said.

Alhaji Mohammed said the opposition has thrown caution to the wind in its futile attempt to divide Nigeria along ethnic and religious lines by using fake news to blame all the killings in a certain part of the country on herdsmen, ignoring the bands of deadly militia groups that are being sponsored by unscrupulous people to kill innocent people and put the nation on edge.

He cited the example of how the opposition is distorting the fact that the clashes between the farmers and herders are being aggravated by climate change – which has heightened the contest for scarce natural resources like water and land – as well as demographic pressure.

The Minister said the morbid fear the opposition harbors that when he is re-elected in 2019, President Buhari will consolidate on the fight against corruption, has thrown the opposition camp into confusion, hence the frenzy with which they fabricate and publish fake news in order to cast the government in bad light.

“Many politicians know that the only way to distract this government is to spread fake news and they are being very selfish and they have amassed so much wealth that they can continue to sponsor fake news at a very dangerous level for as long as they want.

“Many of them have this morbid fear of the President being re-elected because they know that in his second term, the war against corruption will start yielding fruits. There are so many cases in court today and they are just praying and doing everything to distract the government so that their cases will be scuttled,” he stated.

Alhaji Mohammed said that for the first time in the history of
Nigeria, there is a re-distribution of the nation’s wealth from a few to the generality of the public

He said the Administration’s Social Investment Programme is providing one meal a day for 8.5 million pupils across 23 states; the Conditional Cash Transfer is empowering 400,000 families with N5,000 every month, the Government Enterprises and Empowerment Programme is making available loans to artisans and craftsmen as well as market women while the N-Power Programme has provided employment for over 200,000 unemployed graduates.

The Minister commended the Authority Newspapers for being the first media outlet to write an Editorial in support of the campaign against fake news, saying he chose to kick-start the media tour with the newspaper in appreciation of their efforts.