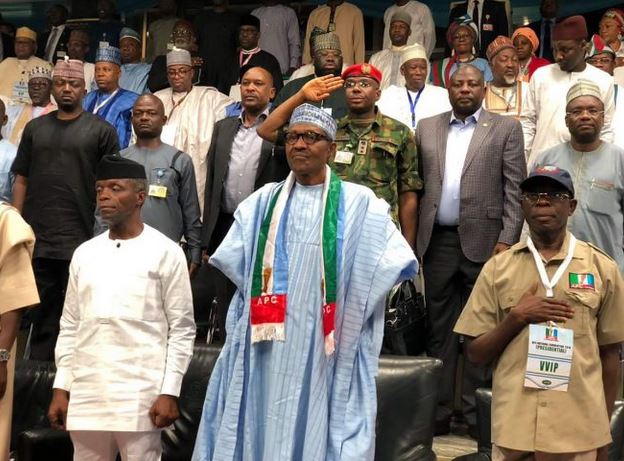 The Minister of Finance, Mrs Zainab Ahmed, says President Muhammadu Buhari has performed well and deserves to be re-elected in 2019.

Mrs Ahmed made the remark on Sunday in an interview with the News Agency of Nigeria (NAN) at the All Progressive Congress (APC) National Presidential Convention in Abuja.

NAN reports that 14, 842, 072 members of the APC had at the party’s National Presidential Convention in Abuja, affirmed President Buhari as the candidate of the party for the 2019 Presidential Election.

The minister, who said that President Buhari had done wonderfully well in this first term, urged all eligible Nigerian voters to come out and vote for him in 2o19.

”The president has done extremely well. People should remember where we are coming from and where we are, right now.

”We have done a lot of very good programmes and projects. Some have been concluded but there is still a lot that needs to be done.

”So we need to vote for him and return him as president so that he can complete the good work he has started.

”Therefore, my call to Nigerians is that everybody should come out en masse to exercise their civic right and people should not be deceived by money or other forms of inducement.

”Look at the person you are voting for; does he have the pedigree, the ethics to be the right person? That should be our guiding principle,” she said.

Similarly, the Minister of Budget, Senator Udo Udoma, said though President Buhari had done well, he would do better in his second term.

”As you can see that we had a very successful convention and we are all delighted to support President Muhammadu Buhari in his quest for a second term.

”We believe that we have done well and that in his second term, he will do even better,” Udoma said.

He called on Nigerians to vote President Buhari for second term in 2019.

”They should come out and vote for President Muhammadu Buhari because as I said, he has done well and in his second term, he will do even better because he will come with the experience of the first term,” he said.

Also, the Special Adviser to the President on National Assembly Matters (Senate), Senator Ita Enang, said that President Buhari had performed excellently well in all sectors of Nigerian economy.

”President Buhari has performed well in all sectors of the process of the economy, education, international relations, technology, employment, and all other sector.

”He has performed well within the limit of available opportunity,” he said.