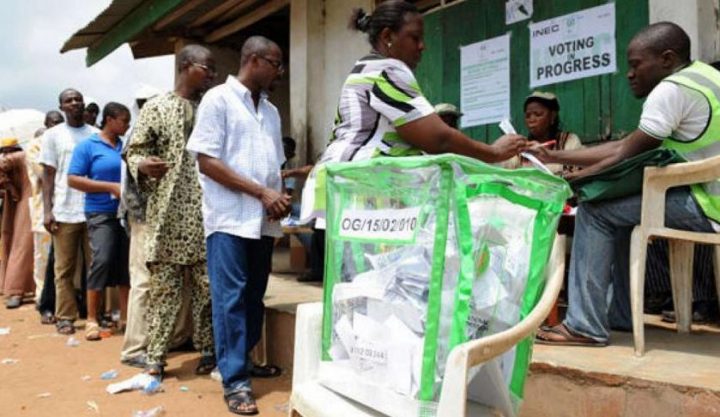 The Independent National Electoral Commission (INEC) says voting would hold simultaneously with accreditation of voters during the 2019 general elections.

Mr Festus Okoye, INEC National Commissioner and Chairman, Information and Voter Education Unit, disclosed this while speaking at a workshop for journalists on the 2019 election by the American Embassy in Abuja on Wednesday.

Okoye, who presented a paper: “the media and reporting of election results’’, said only voters with verified Permanent Voter Cards (PVCs) would be allowed to vote.

“For the 2019 general elections, the voting procedure shall be in accordance with the Continuous Accreditation and Voting System (CAVS) and only voters with PVCs verified by the Smart Card Reader (SCR) shall be allowed to vote.

“The accreditation process shall comprise verification by SCR, checking of the register of voters, and inking of the cuticle of the specified finger,’’ he said.

Okoye said INEC would not use incident forms for individuals whose fingerprints were not authenticated in the 2019 poll.

“Where the voter’s fingerprint is not authenticated after four attempts using SCR, the fingerprint shall be recaptured in the prescribed manner and continue with the accreditation and voting process,’’ he said.

Okoye said INEC had put in place necessary mechanism to ensure that the election was free, fair and credible.

“The presiding officer shall be responsible for regulating the admission of voters to the polling unit and shall exclude all other persons except candidates and their polling agents, election officials and security personnel.

“Others are accredited observers and any other who in his opinion has lawful reason to be admitted,’ he said.

The News Agency of Nigeria (NAN) reports that the workshop, which was attended by representatives of various media organisations was also held at the American Space in Ibadan, Bauchi, Kano and Cababar simultaneously.

Resource persons at the event included Mr Gary Kebbel, a Professor of Journalism at the University of Nebraska Lincoln, Aliyu Mustapha, Managing Editor, Voice of America and Mr Musikilu Mojeed, Chairman, Board of Premium Times Centre for Investigative Journalism.