The Independent National Electoral Commission (INEC) on Monday raised alarm over a new method of vote buying being devised to undermine the voting process.

INEC Chairman Mahmood Yakubu disclosed this in Abuja at the presentation of the Voter Register for the 2019 general election to political parties.

Yakubu said that the commission had received credible information that some partisan actors were going round buying up Permanent Voter Cards (PVCs) from voters or financially inducing them to collect the Voter Identification Numbers (VIN) on their PVCs. 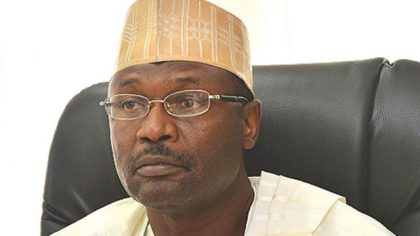 “In some instances, telephone numbers and details of bank accounts of voters have been collected. By collecting the PVCs, their intention may be to deprive the voters of voting since no one can vote without the PVC.

“By collecting their phone numbers and bank details, the intention is to induce voters by electronic transfer of funds to their accounts since it will be difficult to buy votes at polling units.

“By collecting the VINs, they may be acting on the mistaken notion that our system can be hacked into and the Card Readers somehow preloaded ahead of election and compromised.

“We want to reassure Nigerians that we are aware of the new tricks. It is a futile effort.

“We will work with the security agencies to deal with the violators of our electoral laws, including those who may be trying to compromise our staff responsible for making the PVCs available for collection by legitimate voters.’’

Yakubu said that the commission had responded to the vote buying menace in three ways, including the alteration of the configuration of polling units by moving the ballot boxes closer to the voting cubicles, making it difficult for voters to expose their marked ballot papers.

“ Secondly, we have introduced a partial ban on the use of mobile phone and other photographic devices by voters while in the voting cubicles.

“Thirdly, we are introducing the rolling and flattening of ballot papers by voters before casting them into the ballot boxes.’’

Yakubu disclosed that after the mandatory display of the register in all polling units nationwide for claims and objections from Nov. 6 to Nov. 12, 2018, the final register for the 2019 general elections stood at 84,004,084 voters.

He also disclosed that there was no change in the number of polling units and voting points used for the 2015 general elections and the 2016 area council elections in the FCT.

He said that the commission had printed and delivered the PVCs to the states for collection, urging all registered voters to approach any of its local government offices and other designated collection centres nationwide to pick up their cards in person, not by proxy.

Yakubu, who re-emphasised that the Smart Card Readers would be used for the 2019 general elections for the accreditation of voters, disclosed that the register of voters had been modified.

He said that where the biometric authentication failed, the voter would be required to thumbprint a box next to his/her picture on the register and to enter his/her mobile telephone number before proceeding to vote.

“The Commission has modified the Register of Voters for the 2019 General Elections, accordingly.

“Consequently, the separate Incident Form used in previous elections which is only completed by the Presiding Officer without the involvement of the voter is now abolished.

“Similarly, the claim that the Card Reader has been enhanced to recapture voters’ fingerprints at polling units and automatically overwrite the biometric record on our database is untrue and should be disregarded.’’

He further said that INEC would keep close watch on campaign finance by political parties by monitoring spending by parties and candidates as well as individual and group donations to campaign organisations.

“The Commission has designed Campaign Finance Reporting Forms to ensure compliance with the reporting requirements by parties.

“The EC16C for annual finance reporting by parties, the ECl6D for income (including contributions and donations) and EC16E on party expenditure are already available on the Commission’s website.’’

Meanwhile, INEC Director of Voter Register, Mr Iro Gambo, while making a presentation, said that the South- South had 12,841,279 registered voters, representing 15.29 per cent of the 84,004,084 total number of registered voters.