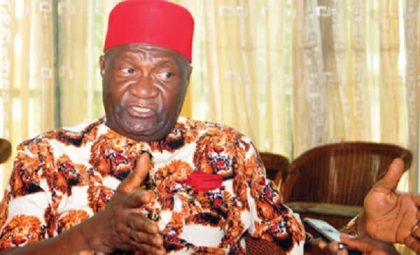 Ogbonna told the News Agency of Nigeria (NAN) that politics is all about interest, adding that Mr. Babajide Sanwo-Olu has demonstrated the desire to protect the Ndigbo interest if elected as Lagos State Governor.

While speaking on the sporadic attack on Igbo during the last Presidential and National Assembly elections in the state, he said the APC candidate would protect the Igbo interest better.

He said though the group was a social-cultural one that reserves the right to guide interest of members in order to remain relevant in the scheme of things.

He said the group was only supporting the governorship candidate that people were free to vote for candidates of their choice that would protect their interest in the state assembly.

Ogbonna said it is only Sanwo-Olu that has sympathized with the group following the attack on them during the last election.

“The governorship candidate has said he will compensate victims of vandalism as a result of the last election in the state.

“Therefore, as I said earlier people should not be intimidated into voting for a person or party people should be allowed to vote candidate of their choice.

“It is my advise that people should vote for Sanwo-Olu.

“I urge all the traditional leaders in Lagos to caution their people against the attack on the Igbo during this Saturday election because such may be snowballed into wide crisis,’’ he said.