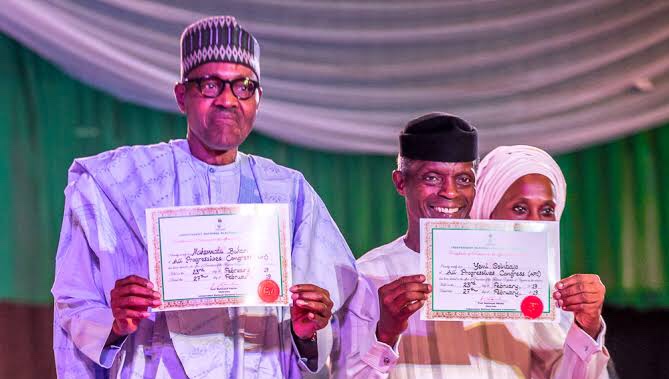 The Minister of Information and Culture, Alhaji Lai Mohammed, has said President Muhammadu Buhari’s victory in last Saturday’s presidential election symbolizes the triumph of the ordinary Nigerians over the elite.

The Minister made the remarks in Abuja on Thursday when he received the management of his ministry, who came to congratulate him on the victory of the All Progressives Congress (APC) at last week’s Presidential and National Assembly elections.

Alhaji Mohammed said the President’s victory is a confirmation of the fact that ordinary Nigerians appreciate the pro-people policies of the present administration which, he said, is doing more with far fewer resources.

“Overall, this government is doing more with less and is restoring decency and integrity to governance. Like the New York Times said, the re-election of President Buhari is a referendum on honesty. There is no better way to put it,” he stated.

While reeling out the policies that endeared President Buhari to the ordinary Nigerians, the Minister said under the Social Investment Programme, the government feeds 9.3 million school children every day and some 500,000 unemployed graduates have been employed under N-Power, in addition to some 300,000 families who are benefitting from the Conditional Cash Transfer.

He said in a deliberate effort to boost the Small and Medium Enterprises to contribute significantly to the nation’s economy, the Buhari Administration gives out interest-free loans of between N10,000 and N100,000 under the TraderMoni and the MarketMoni Schemes to small business owners.

“Pensioners who have been left in the lurch are being paid, and I am talking of ex-workers of the Nigerian Airways, NITEL and former Biafran Policemen, among others. The former Nigeria Airways staffers were so delighted that they held a rally in support of the President
before the elections,” Alhaji Mohammed said.

He said the fight against corruption is being institutionalized with a number of policies that include Treasury Single Account (TSA), Whistleblower policy, and that it has led to the recovery of huge amounts of money as well as property from looters.

The Minister, therefore, enjoined the citizenry to continue to support the Buhari Administration in the building of a strong, secure, economically-buoyant and corrupt-free society.

On the APC’s victory in Kwara, the Minister thanked the management of his ministry for appreciating his ‘modest’ effort in delivering Kwara State from the grip of a crippling hegemony.

“I must stress – and I have said this before – that the credit for the liberation of Kwara goes to the good people of State who, despite efforts to compromise them, refused to sell their votes. A simple slogan, O To Ge (Enough is Enough), captured the determination of the
people to vote out those who have held them down for decades. And that is precisely what they did,” he said.

In her remarks, the Permanent Secretary, Federal Ministry of Information and Culture, Deaconess Grace Isu-Gekpe, said the entire management and staff of the Ministry are proud of the Minister for his invaluable contribution to the victory of the APC at the presidential and National Assembly elections in Kwara State.