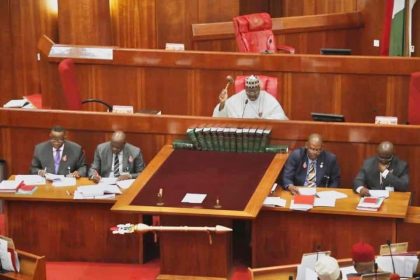 Welcome to a new Legislative Day in the Senate of the Federal Republic of Nigeria.

Senate President, Dr. Ahmad Lawan PhD, CON led the Principal Officers into the Chambers; took the official prayers; and began the day’s proceedings at 10:36am.

PETITION
Senator Chukwuka Utazi raised a petition on behalf of a constituent on his unlawful dismissal from the Petroleum Products Pricing Regulatory Agency (PPPRA).

Senate President, Ahmad Lawan PhD, CON referred the petition to the Committee on Ethics, Privileges and Public Petitions to report in four (4) weeks.

POINT OF ORDER
Senator Chukwuka Utazi cited Orders 42 & 52 and moved a motion on the national security versus disproportionate road checkpoints on the federal highways in the country.

“I commend my colleague for this timely motion. There are a lot of checkpoints on our roads. Kidnappings happen everyday and very close to these checkpoints. I wonder what they are even doing.”- Senator Uche Ekwunife.

“Let me commend the mover of this motion and at the same time adopt what has already been expressed by my other colleague who have spoken on this. In addition to the trauma suffered by commuters on the road and this numerous checkpoints mounted by all security agencies, what happens is that on the roads police stop people in a commuter bus and ask people to come out, ask people to open their phones, if they see transaction on your phone they will arrest you as a launderer and because of that the arrested commuter becomes a victim.”- Senator Enyinnaya Abaribe.

National Agency for the Research and Management of Persons with Special Needs (Est, etc) Bill, 2019 (SB. 255) was read the First Time.

Senator Stella oduah seconded that the Senate do consider the report of the Committee on Appropriations on the 2020 Appropriation Bill (SB. 80).

“I rise to support and commend the chairman and members of Appropriations Committee. By the grace of God, let us pass this one today even if it takes us till midnight, we must finish it.”- Senator George Sekibo.

“I will like to thank the Committee and leaders of the National Assembly for making this possible. In looking at this budget there were a lot of constraints and we would have also done better in some areas. The first is the exchange rate, the next year budget should also find a way of addressing unemployment. Nigeria has not shown interest in environmental issues and this year has about N9billion for the whole of environment. We need to do something about security and provide for those key sectors and provide a safe atmosphere for people to go about their business. I move that this Bill be fully considered and passed today.”- Senator Ike Ekweremadu.

“This appropriation prioritizes what we are all clamoring for and that is security. If you look at the budget, the security takes a lion share. I want to commend the Committee and urge my colleagues to support this wonderful Bill.”- Senator Stella Oduah.

“I commend the chairman and members of the Appropriations Committee. The Committee has worked within the parameters to ensure they give a budget that will work for the common man and a budget that will take us to the next level.”- Senator Solomon Adeola.

“I want to extend my gratitude and thanks to all my Distinguished colleagues who worked really hard to make sure that this budget sees the light of the day within the time frame that we have set for ourselves. I congratulate everyone for their commitment and for the hard work. I want to thank the executive arm of government for the unprecedented urgency that they have presented the budget and we hope that highest preparations will be done towards the 2021 budget.”- Senator Yahaya Abdullahi.

“Now that budget has been passed and all the laws being amended, the focus should now shift on pursuing revenue to ensure the implementation of the budget.”- Senator Bassey Akpan.

“This could not have been possible without the efforts all of you have put. When we came in, all of us approved our legislative agenda which was to ensure we take back our budget cycle to a cycle that could easily be defined and to something that could easily be bought into. Today we have been able to achieve this. I must give members of the 9th National Assembly the credit. Let me also commend the executive arm of government. We pray that the executive is able to implement the budget fully. Once again I want to congratulate all of us here and I hope we continue to work together as colleagues to ensure the 2020 budget is fully implemented.”- Senate President, Ahmad Lawan PhD, CON.