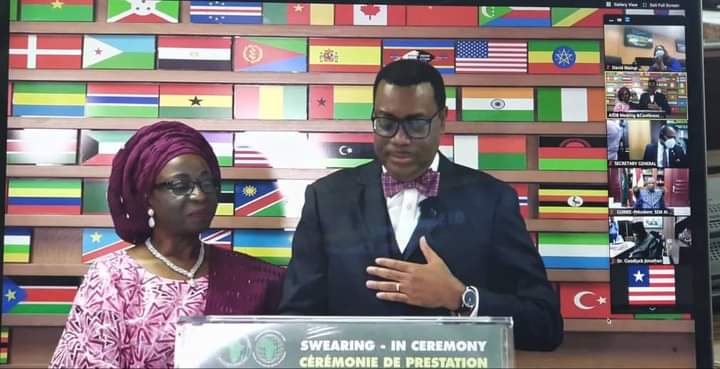 The Federal Government has congratulated Dr Akinwumi Adesina, President of African Development Bank (AfDB) Group on his re-election as the eighth president of the bank for a second term.

The congratulatory message was delivered by Mrs Zainab Ahmed, Governor of Nigeria to AfDB, and Minister of Finance, Budget and National Planning on Tuesday.

Ahmed said that the Federal Government was proud of Adesina and commended his commitment and passion for the bank.

“The unanimity of the vote is a clear indication of the support of the entire membership of the AfDB for your leadership and programmes, and I use this opportunity to thank all of my fellow Governors for their support to you.”

The minister reiterated the success of the AfDB president’s first tenure, adding that the introduction of the High-5 Agenda would spur the continent in achieving the Sustainable Development Goals (SDGs).

“It has been noted by experts that if we succeed in diligently implementing the High-5s, it will automatically mean that Africa would meet most of the SDGs of the United Nations, which, itself, is a global blueprint for development and poverty reduction in a sustainable manner.

“I am aware that there are a number of reform initiatives started during your first term designed to strengthen the bank.

“Bringing these to quick conclusion will certainly help accelerate the achievement of the High-5s, and I am confident that this will be done.

“I commend you for your work and passion for Africa, and wish you even more success in the next five years.”

She appreciated the efforts of the governors in the smooth process of the virtual voting and organisation of the bank’s Annual General Meetings (AGMs).

The minister also commended the bank’s response in providing emergency COVID-19 assistance to regional member countries toward stabilising their economies.

“Bank’s relevance to its regional member countries is directly related to its preparedness and ability to stand with them in challenging times like we are currently in.”

She, however, urged all stakeholders to cooperate to ensure the bank’s smooth delivery and efficiency in the interest of Africa.

“A strong AfDB would be able to play a catalysing role in these efforts, both in terms of lending and policy advice.

“We all need to work together so that the next five years will deliver the High-5s at scale, and truly transform the quality of life of the people of Africa,” she said.

Akinwumi was sworn-in in a ceremony which took place at the AfDB headquarters in Abidjan.

The ceremony was presided over by the newly appointed Chair of the Board of Governors, Ghanaian Finance Minister Kenneth Ofori-Atta, who also administered the oath of office.