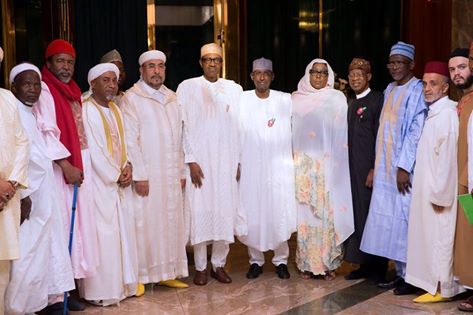 inno.korieNovember 29, 2016 7:51 pm 0
President Muhammadu Buhari Tuesday warned that the two million displaced Nigerians in refugee camps must be properly resettled if the country is to avert a relapse into another social crisis.
Speaking at a meeting with Sheikh Sharif Mohammed Kabir Ibn Mohammad, the world leader of Tijjaniya Islamic Movement at the State House, the President lamented the destruction of public institutions in the North East by Boko Haram terrorists.
“Government is faced with the problem of repairing schools, health centres and whole towns. We must repair their schools and recruit teachers otherwise they will become tomorrow’s Boko Haram,” he warned.
President Buhari reiterated the importance of justice in the affairs of governance, emphasizing that men and women in authority must show kindness and justice to all the people under them.
In commending the religious group for the profuse prayers they had rendered for three days in Yola, Adamawa State for the recovery of the economy and peace in the country, the President said that the problem oil production is currently experiencing in the country and in the global markets had forced the imperative of agriculture on Nigerians.
“We are learning the hard way.  The mistake we made was to abandon agriculture.  We came at a time of difficulty the country has never experienced since the civil war,” he said.
President Buhari also requested the religious leaders to persuade Nigerians to embrace hard work, endurance and patience, assuring that the administration will not relent in the effort to achieve self-reliance and security for the nation.
In his remarks, Sheikh Sharif Mohammad commended President Buhari’s sense of justice and concern for the people of Nigeria.
He assured the President that the Tijjaniya movement was in full support of the administration and will continue to pray for its success.
GARBA SHEHU
Senior Special Assistant to President