inno.korieNovember 1, 2016 6:51 pm 0
President Muhamadu Buhari, on Tuesday at the State House in Abuja held a high-level meeting with leaders and other stakeholders to seek ways to end the militancy and the sabotage of oil infrastructure in the Niger Delta region. 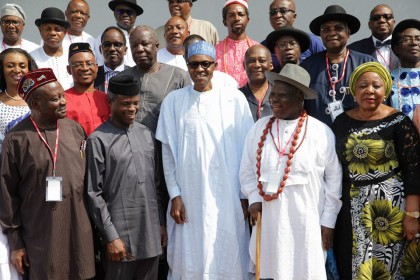 The President, who did not read from a prepared speech, pitched a vision of unity and progress for the country in which peace reigns.  He said peace, security, investment and prosperity are linked together, adding that “if we give peace a chance, investors will come here to invest.  Nobody will invest in an insecure environment”.
In a speech dripping with nationalist fervor, President Buhari said the problems his administration found on the ground were many, as illustrated in collapse of oil prices, inability of 27 of the 36 states of the Federation to pay salaries, absence of savings to fall back and having to deal with an elite who didn’t seem to care.  All these, he said, made his government conclude that: “life, as usual, is no longer affordable.”
While welcoming the 16-point request presented for negotiation by the Niger Delta leaders, President Buhari said he was still expecting reports from officials he had instructed to review the implementation of the Amnesty program to determine where government fell short so that amends can be made.
The President said the service chiefs were putting together their own assessment of the militancy situation, saying “when I have these reports, including this one (just presented), we will revisit the situation (in the region) to ensure that we succeed this time.”
He, however, cautioned the leaders of the Delta that they had more to do than anyone else to bring peace to the region, given the influence they have on militant groups.
He expressed the determination of his administration to stay focused on its key campaign promises of securing the country, fighting corruption and creating jobs through the improvement of the economy.
“We are determined to make life comfortable and affordable to all Nigerians. If anybody has a country to go to, let him go, we will stay here and salvage our country.”
The President who delivered his report card on the war against corruption and the efforts to secure the country repeated his call to the Niger Delta leaders to join the administration in bringing peace to the troubled region.
“Please Your Excellencies, Your Majesties, Distinguished ladies, and gentlemen; we all have our individual constituencies.  Let us try to pacify our constituencies.  Let us first recover our country, secure the country and let us invite people who will invest.  Let us create jobs for our people and let us be accountable to our people where we are sitting on treasuries, whether it is local government, state or the center.  We should ensure that we rebuild this country.  Nobody wants to fail. So, the only way out is, if people understand and believe that we are doing our best at all levels, then we will have some peace.  But it they have reason to doubt our performance and sincerity, then we will have problem”.
In their own presentation, the leaders and Stakeholders of the Niger Delta Region led by Chief Edwin Clark, a former minister put across to the President 16 issues for dialogue, for which they demanded a composite government committee. The issues included, among others, the completion of major road projects in the region, the take-off of the maritime university, the full activation of ports in Niger Delta and other waterways, the relocation of international oil companies to the region. Others issues include the issuance of oil blocks to the states and other stakeholders as well as the strengthening of the Niger Delta Development Commission, NDDC and the Ministry of Niger Delta Affairs.  They also broached the issue of fiscal federalism.
The Niger Delta leaders reaffirmed their support for the Federal Government under President Muhammadu Buhari and expressed their total commitment to the unity, peace, and stability of the Federal Republic of Nigeria.
The Vice President, Professor Yemi Osibanjo, the Chief of Staff, Abba Kyari and the Secretary to the Government of the Federation, Engr. Babachir David Lawal accompanied the President to the meeting.
The Ministers of Justice, Defence, Petroleum (State), Transportation, Niger Delta, Education (State), the Chief of Defence Staff, the National Security Adviser, the Director-General, DSS, the Chief of Army Staff, Chief of Naval Staff, the representative of the Chief of Air Staff and the Inspector-General of Police were also in attendance.