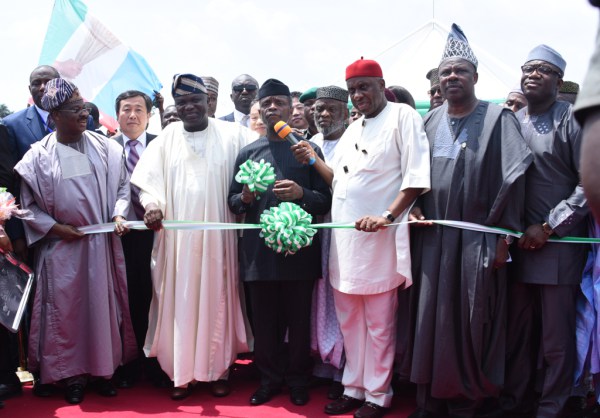 I am extremely pleased and honored to be here this morning for the ground breaking ceremony of the Lagos-Ibadan section of the Lagos -Kano standard gauge railway project.

This is an epochal moment in our national life in many ways.

First, it signals the determination of our President & Commander-in- Chief, President Muhammadu buhari to modernize the national rail system in keeping with his promise to the Nigerian people. If there is a project close to the heart of the president, it is the rail project which he promised the nation upon assumption of office. The President himself made a visit to China, and reopened the negotiations on the Chinese support for this project.

Second, this ceremony also marks the commencement of our plan to move speedily to improve links between Lagos which is the national economic nerve center and major port to other state capitals and towns across the country.

Thirdly, our ground breaking today reflects the plans of the Federal Government to build a globally competitive economy with first grade infrastructure. The critical role of infrastructure, and for this purpose railways, in this strategy is underscored by our Economic Recovery and Growth Plan, as well as the 2016 and 2017 budgets. We have made provisions for matching funds in the 2016 budget to complement the concessionary loans taken from the Peoples Republic of China, and our appreciation goes to the Chinese Government and the Chinese Exim Bank, who are, and have always proved to be reliable partners to Nigeria.

And some may be aware that we have the entire Lagos-Kano standard gauge track as well as the Lagos-Calabar railway track in the 2017 budget, negotiations on the Kaduna-Kano portion of the track is now completed and this phase is next in line.

We have already provided our portion for funding Lagos-Calabar rail as well and we expect that negotiations on the foreign component of the funding will be finalized in the next three months and that the Lagos-Calabar project as well will come on stream.

An active and vibrant railway system confers many benefits on the society and our ultimate goal is to restore a railway-using culture for both commercial and personal transportation. We are confident that the national rail project will create up to half a million jobs and facilitate the movement of over 3.2 million tonnes of cargo per annum.

It will also reduce the burden on national highways, thus reducing the deterioration of the road network and increasing the lifespan of our roads. Indeed by helping to reduce freight cost, the railway network will support efforts to diversify the economy and enhance our export potential.

Just as several of our cities are being known as railway towns in the past, we expect a boost to economic activities along the railway lines that will eventually cut across the entire country. To achieve this objectives, the Federal Ministry of Transportation has completed visibility studies for up to 13 routes which has been identified for connecting state capitals and major commercials centers to the rail network. We should begin to see significant activities in this regard very shortly.

It is important however to have viable self-sustaining and self-improving railway service. It should be one that is not reliant on government funding which may not  be available at all times. It should be one that could be upgraded and improved over time and not left to decay due to management issues or lack of attention. This is why the Federal Government supports the replacement of the 1955 Railway Act with a legal framework that opens railway projects in the country  for greater private sector participation. In this way, we expect to ensure the resources and management to run efficient modern and reliable train services.

Let me conclude by acknowledging the vigorous and energetic efforts of the Honorable Minister, and his team in the Ministry of Transportation to get us to this point. The Honorable Minister of Finance also deserves to be commended for the efficient and competent handling of financial negotiations.

But I think it bears repeating: that Rotimi Ameachi’s bulldozing approach to ensure that we are here today on this first day of construction so quickly!

I am confident that we will see the same zeal and result in project executions so that the construction of the railway lines will be completed on schedule. Just for emphasis, as a reminder to our excellent partners and manufacturers CCECC, we are looking forward to a fast and efficient train service between Lagos and Ibadan within the projected time frame, which is on or before December 2018.

In a moment, I will be inviting you to join me in this historic ground breaking of the Lagos-Ibadan portion of the Lagos-Kano rail project.

Thank you for your kind attention.