The Presidency has described as false the social media report that President Muhammadu Buhari refused to grant audience to Gov. Abdullahi Ganduje of Kano State during the recent Eid-el-Kabir holidays. 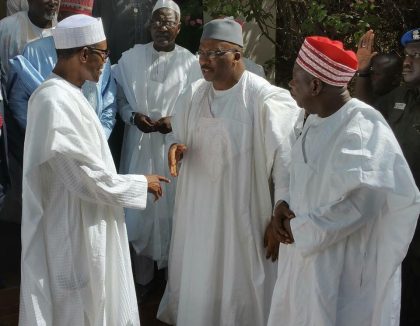 Mr Femi Adesina, the President’s Special Adviser on Media and Publicity, in a statement issued in Abuja on Monday, said the report was the antics of mischief makers, who wished to score cheap political points against the governor.

The presidential aide observed that the President had received Gov. Ganduje, along with others, a few weeks ago in London, and governor had also welcomed the President, alongside many others, on his return to the country on Aug. 19.

He said: “Why would such a person then be snubbed, as being reported, particularly on social media?

“Gov. Ganduje had visited Daura during the Sallah holidays to commiserate with the Emir of Daura, His Royal Highness Faruk Umar Faruk, who had recently lost his younger brother, Barden Daura.

“The governor then used the opportunity to be part of the Eid-el-Kabir celebration.

“There is absolutely no reason for President Buhari to have snubbed Gov. Ganduje, or anybody else for that matter. It is not in the character of our President.’’

President Buhari, on Sept. 6, returned to Abuja after spending the Sallah break at his country home Daura, Katsina State.

While in Daura, the President, apart from performing the Eid prayers along with thousands of Muslims at the Daura Eid ground, received various dignitaries including the Nigerien President, Mahamadou Issoufou.(NAN)