AOC-The Joint Admissions and Matriculation Board (JAMB) has announced 6 August, 2021 as examination date for candidates who were unable to sit for the 2021 Unified Tertiary Matriculation Examination (UTME) due to some valid reasons. 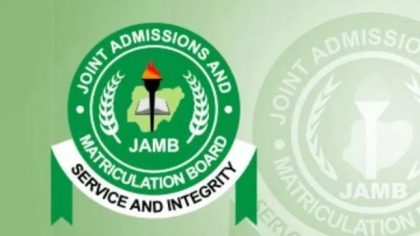 A statement signed by JAMB’s Head of Public Affairs , Dr Fabian Benjamin, Following due consultation with the National Examination Council (NECO) concerning the timetable of the council’s ongoing SSCE, JAMB has scheduled a Mop-up UTME  in some selected locations across the nation.

About 18,000 candidates slated for the examination are being notified through both text messages on their designated phone numbers and their JAMB profiles.

The statement added that
no candidate whose result has been duly released will be rescheduled for another examination contrary to the sponsored fake news being circulated on the social media.
Candidates who could not be initially scheduled for examination owing to their inability to timely procure and supply their mandatory NINs or profile codes until after the close of the registration exercise and, therefore, had to purchase Bank Drafts ( as against the usual vending of PINs) after the scheduled period for the examination and were later register