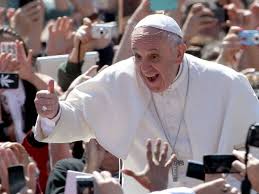 Vatican City (AFP) – Pope Francis on Thursday accelerated his streamlining of the Vatican bureaucracy by announcing plans to create a new ministry which will increase the role of lay believers in the Church.

Effectively three existing Vatican bodies will be merged into one in a move that had been trailed but had not been expected to be confirmed during the ongoing synod on Catholic teaching on the family.Francis made the announcement to an afternoon session of the synod, which is due to conclude at the weekend after three weeks of often heated discussions on issues such as divorce, homosexuality and cohabitation.

“I have decided to establish a new Dicastery (ministry) with competency for Laity, Family and Life,” Francis told the assembled bishops and other synod participants.

Francis has already acted to make the Vatican curia — the Church’s senior civil service — more efficient by creating a super ministry for the economy and another one which deals with media and public relations.

The reforms have sparked resistance amongst the officials affected by the changes. Officially there have been no redundancies but inevitably a number of officials have been sent back to their home dioceses as a result of the changes.

NEWER POSTKifasi Hands Over to Acting Head of Service of The Federation Oyo-Ita
OLDER POSTLagos State Donates N150m to Adamawa, Borno and Yobe to Assist IDPs