Gov. Gaidam, Sultan, Others Speak on Peace and Scholarship 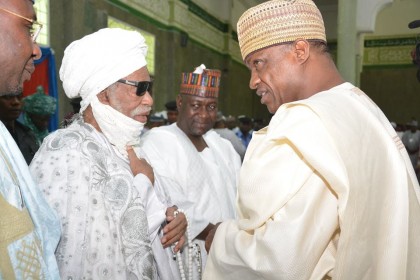 Governors from the Northeast, traditional rulers, scholars and researchers converged on Damaturu today at the opening of a two-day North East Regional Conference on ‘Peace and Scholarship: The True Legacies of Kanem-Borno and Sokoto Caliphate’.

Organised by the International Organisation of Tijjaniyah Brotherhood in collaboration with Arewa House, Ahmadu Bello University, Zaria and others and with the support of the Yobe State Government, the Conference seeks to explore the legacies of Kanem-Borno and Sokoto Caliphate in reviving and perpetuating the values of peace, knowledge and scholarship in post-Boko Haram Northeast and the northern part of the country in general.

In his speech, H.E Gov. Ibrahim Gaidam said the Conference couldn’t have come at a better time. “This is because the region has started to experience peace and improved security situation following the wanton and senseless acts of destruction of lives and properties by the Boko Haram Insurgents. You may recall that the activities of the insurgents which initially started in 2009 in Borno State spilled over to Yobe and other States with consequent loss of lives as well as destruction of public and private property worth billions of naira. It has equally brought disruption of socio-economic activities in the North East sub-region over the past seven years, a situation that may perhaps take us several years to recover”, the governor said.

The Governor dwelled on the histories and historical legacies of the Kanem Borno Kingdom and Sokoto Caliphate, arguing that their emphasis on acquiring and spreading knowledge about the teachings of Islam helped people in those epochs lived a productive and peaceful life. “It follows that the growth, development and evolution of a vibrant and stable economy are predicated on a well-educated and informed populace. When there is a combination of peace and well educated citizenry, they can be used as veritable tools to address various challenges facing any community, state or nation”, he said.

The Governor also dwelled on the Boko Haram Insurgency which had caused so much pain and destruction of life and property for over six years across the Northeast and other parts of the North. He said Boko Haram ideology is hateful and unislamic, and emphasised that ‘terrorism has no religion’.

As peace returns across the Northeast, the Governor called for an all-hands-on-deck approach among various stakeholders to nurture and sustain the peace.

“I wish to urge the Federal Government, State Governments, Islamic Scholars, leaders of thought, our traditional rulers and community leaders, civil society organizations and indeed all other stakeholders who have roles to play to come together, work together and act together to chart a common front towards entrenching peace, fostering unity, scholarship and promotion of education”, the Governor said.

The Kanem Borno Kingdom and Sokoto Caliphate, , who is represented by His Royal Highness the Emir of Bauchi, Alhaji Rilwanu Suleiman Adamu, also underscored the importance of the legacies of Kanem-Borno and Sokoto Caliphate. He said the legacies left behind from those eras are ‘geared towards the establishment and sustenance of peace, justice and civilisation’.

The Sultan observed that the failure of Muslims across the North to “keep these facts in our minds led to the catastrophic situation in which we found ourselves today”.

Other speakers, including the Shehu of Borno, who is represented by the Emir of Dikwa, Professor Abdullahi el-Okene and Islamic Scholar Sheikh Dahiru Usman Bauchi also spoke on the need to promote knowledge and scholarship among Muslims as a means of entrenching peace and peaceful co-existence in the society.