Traders along Airport Road, Abuja, on Friday made brisk business as scores of Muslim faithful thronged Eid praying ground in the area for the Eid-el-Kabir prayer. 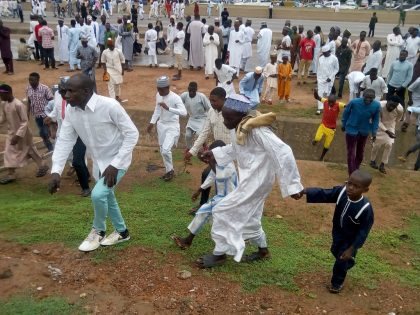 Some of the traders, who spoke to the News Agency of Nigeria (NAN), said they recorded high sales immediately after the prayer.

A shoe dealer, who identified himself simply as Mustapha, said he recorded significant sales immediately the prayer end.
He said that the Eid-el-Kabir period provided him the opportunity of displaying his wares to thousands of worshipers, who came from distant places.
Mustapha said that celebration like Eid-el-Kabir gives him the opportunity to make more money.
Malam Kabiru Muhammed, who deals on textiles, said that there was impressive patronage after the Eid-el-Kabir prayer.
He said that immediately after the prayer, he rushed back to attend to his business, adding that the patronage was high.

Muhammed said that celebration like Eid-el-Kabir, is not very common, so no businessman can joke with the opportunity.

Meanwhile at the Federal Housing Estate Lugbe, some Muslim faithful were seen making last minutes effort to buy ram at the early hour of Friday.
One of the buyers, who refused to give his name, said he was only able to complete the money for the ram late Thursday’s evening, adding that all that matter was to meet the deadline for the sacrifice. (NAN)