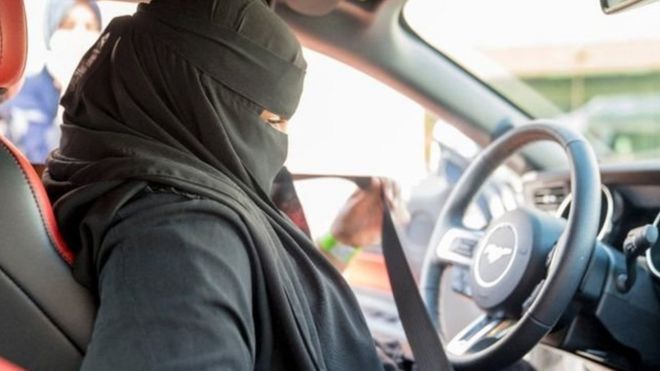 Saudi Arabia women hit the roads on Sunday, ushering in last ban on female drivers, long seen as an emblem of women’s repression.

“It’s a beautiful day,” businesswoman Samah al-Qusaibi said as she cruised around the eastern city of Khobar just after midnight, with police looking on.

“Today we are here,” she said from the driver’s seat. “Yesterday we sat there,” she added, pointing to the back.

This is his bid to transform the economy of the world’s top oil exporter and open up its cloistered society.

“It is our right and finally we took it.

”It is only a matter of time for the society to accept it, generally,” said Samira al-Ghamdi, a 47-year-old psychologist from Jeddah, as she drove herself to work.

The lifting of the prohibition was welcomed by Western allies as proof of a new progressive trend in Saudi Arabia.

This prohibition,  for years drew international condemnation and comparisons to the Taliban in Afghanistan.

But it has been accompanied by a crackdown on dissent, including against some of the very activists who previously campaigned against the ban.

They now sit in jail as their peers take to the road legally for the first time.

The number of new drivers remains low, as women with foreign permits were only able to convert them starting this month.

An interior ministry spokesman declined to specify how many licenses had been issued but said 120,000 women had applied, from an eligible pool of around nine million.

Most will have to train at new state-run schools, with three million women expected to be on the roads by 2020.

Some still face resistance from conservative relatives, and many accustomed to private drivers say they are reluctant to take on the country’s busy highways.

“I definitely won’t like to drive,” said Fayza al-Shammary, a 22-year-old saleswoman.

“I like to be a princess with someone opening the car door for me and driving me anywhere.”

The Interior Ministry plans to hire women traffic police for the first time, but it is unclear when they will be deployed.

A traffic police official reported that no unusual incidents had been recorded as of Sunday afternoon.

Riyadh resident Amr al-Ardi said the women in his family would wait to see how the system works before they start driving.

The decision to lift the ban in the kingdom – where once-forbidden cinemas and concerts have also returned – is expected to boost the economy.

Saudi stocks rose nearly two per cent on Sunday and insurance firms made solid gains, as demand from women is expected to boost the automotive sector.

The change should also save families billions of dollars on chauffeurs while encouraging more women into the workforce and raising productivity, if only modestly at first.

“Independence Day” read the front page headline in the English-language newspaper Arab News. Social media largely erupted in celebration, though there were some voices of dissent and derision.

One Twitter user said he would not allow his wife to take the wheel: “If she wants to drive she can go to her father and God willing she will drive lorries”.

Much of the kingdom’s overwhelmingly young population supports Prince Mohammed’s reforms, but many Saudis fear their speed could provoke a backlash from religious conservatives once seen as dominant. (Reuters /NAN)