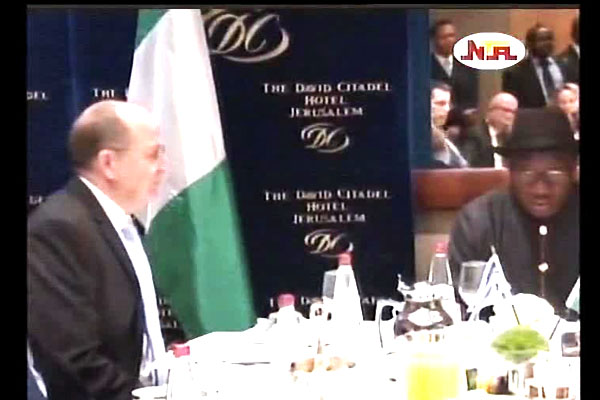 In a bid to boost Nigeria’s security architecture in the face of challenges in the sector, President Goodluck Jonathan has received Israeli Defence Minister Moshe Ya alou in Jerusalem to fast forward an existing Memorandum of Understanding. This is the beginning is his two day official visit to Israel. President Jonathan said the idea is to work together as Nigeria is battling with insecurity issues which need to be quickly resolved to enhance socio-economic development which the people are desirous of.President Jonathan said the existing MOU signed by the immediate past National Security Adviser needs to be strengthened. The Israeli Minister welcomed the idea noting that Israel and NIgeria are facing the same terrorist organizations threatening Africa. He said with their experience both countries can enhance cooperation. With President Jonathan were coordinating Minister of Defence Labaran Maku, Works Minister Mike Onolememen, National Security Adviser and Director – General at the National Intelligence Agency.