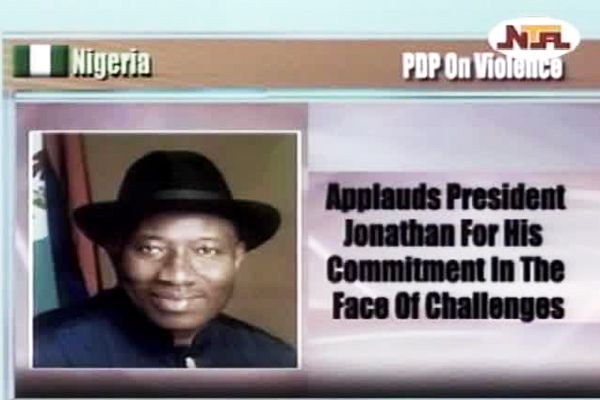 The Peoples Democratic Party says after a careful examination of the trend and character of Insurgency and sectarian violence in the Country, it has discovered that these Acts of terrorism are being sponsored by Unpatriotic elements whose aim is to discredit the Person, Office and Administration of President Goodluck Jonathan.

The National Publicity Secretary of the PDP, Olisah Metuh in a statement noted that the tactic is to distract President Jonathan constraint and the successful delivery of his transformation Program so as to portray him as none performing and finally ridicule his score card. The statement further declared that it is clear that President Jonathan is being persecuted for no other reason that being a Nigerian from a minority ethnic group.

The PDP urged well meaning Nigerians to resist those behind sectarian violence and insurgency in the country and shore up support for President Jonathan in his effort to deliver the dividends of democracy to the People of Nigeria.