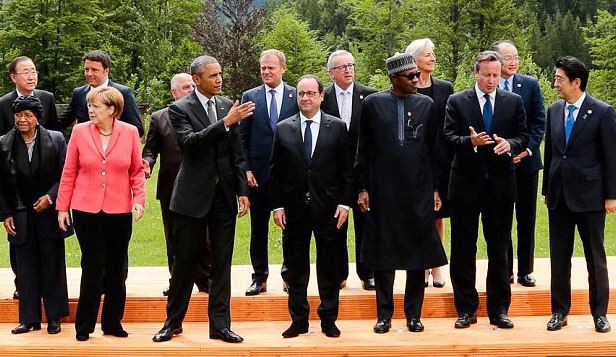 The G7 group of industrialized nations has resolved to support the new Nigerian president, Muhammadu Buhari.

This followed the group’s acknowledgment of the way and manner of his emergence and the tremendous challenges faced by the government he leads, not of his making, especially in its efforts to combat the Boko Haram.

A statement issued by Garba Shehu, Senior Special Assistant (Media and Publicity) to the President said that “at the end of the presentation he made on Monday, the G7 leaders said to him that they recognized the President’s massive amount of confidence and expectations behind his government. They acknowledged him as having emerged from an election adjudged to be the freest in the country’s electoral history, but regretted the severe handicaps his new government has to face from the outset.

“They told President Buhari that they took cognizance of the fact of the several handicaps, including the lack of resources, leaving him with a government over-stretched in capacity, itself riddled with mismanagement. They noted that the country’s army lacked training and equipment with little or no will to engage.

“In recognition of the fact that the security threat of the Boko Haram had gone beyond Nigeria, equally affecting other countries in the region, the G7 conceded that no one country can tackle it alone.

“They expressed warm sentiments towards the Nigerian leader and praised him for reaching out to the country’s neighbours and the group of industrialized nations within a week of his takeover of government.

“In view of the seriousness he has shown in tacking this problem, the group pledged that they would “engage, cooperate and collaborate” with President Buhari’s government in tackling the serious problems that Nigeria faces.

President Buhari, who had the privilege of being the first to address the G7 among the invited presidents and prime ministers was warmly received at the summit. He returned to Nigeria in the early hours of Tuesday, 9 June.