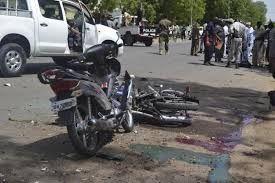 A witness saw at least 10 bodies covered in blankets lying near the southern entrance to the market place next to overturned cartons and scattered vegetables. Security forces cordoned off the area to stop people entering and searched stalls for more explosives.

Several witnesses said the bomber had tried to enter the market wearing a woman’s burqa.