US Plans to Cut 40,000 Soldiers from its Ranks over the Next Two Years

United State  Army plans to cut 40,000 soldiers from its ranks over the next two years, a reduction that will affect all its domestic and foreign posts,

An additional 17,000 Army civilian employees would also be laid off under the plan officials intend to announce this week.

Under the plan, the Army would have 450,000 soldiers by the end of the 2017 budget year. The reduction in troops and civilians is due to budget constraints, the Army asserts in a document obtained by USA 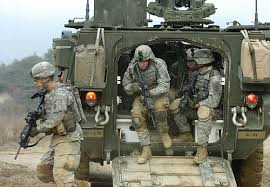 The Army declined to comment on the proposed reductions in its forces.

If the automatic budget cuts known as sequestration, set to begin this year,  the Army would have to slash another 30,000 soldiers, according to the document. At that level, the Army would not be able to meet its current deployments and responding to demands for troops in other regions.