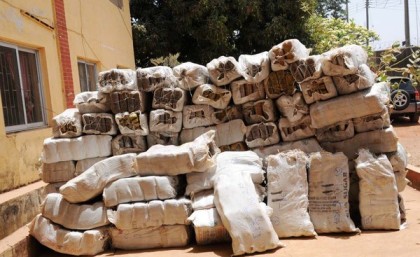 The National Drug Law Enforcement Agency (NDLEA) in Jigawa said it had arrested two suspects with 868.9 kilograms of substance suspected to be Indian hemp.
Commandant of the agency in the state, Alhaji Abdullahi Abdul, disclosed this in an interview with the News Agency of Nigeria (NAN) on Wednesday in Dutse.
Abdul said the suspects were arrested in during raids on hideouts of hoodlums in Kazaure Local Government Area and Hadejia Local Government Area of the state.
He explained that the first suspect was arrested in Hadejia town with 796.9 kilogrammes of the substance.
He added that the suspect nabbed in Kazaure town had 72 kilogrammes of the substance in his possession.
The commandant said that the suspect arrested at Hadejia had been charged to court, adding that the second suspect would be charged as soon as investigation was completed.
Abdul reiterated the resolve of the agency to keep Jigawa drug abuse-free.
He added that the command would continue to fish out persons dealing in drugs and psychotropic substances across the state.