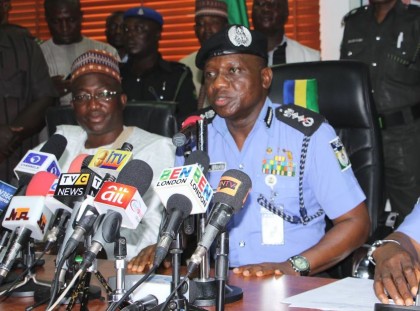 It is with great pleasure and sense of responsibility I address you this morning as the new Ag. Inspector General of Police of our beloved great country. I want to thank Almighty Allah for this day and want to show my utmost thanks and appreciation to the President, Commander-in-chief of the Armed Forces of Federal Republic of Nigeria, and the Chairman of the Nigeria Police Council, President Muhammad Buhari, GCON, for having the trust and confidence in me and for appointing me to this exalted position. I promise not to fail this nation in our quest to make the citizens of this Country safer and also to ensure that our nation remained united and peaceful. I want to use this opportunity to inform you of our policy direction in the management of our Police Force from this day.
The Nigeria Police Force will henceforth be guided by the international core values of policing with integrity, ensuring that the rule of law prevails in our actions and activities, and to strictly respect diversity, courage, compassion and professionalism. The Nigeria Police also would operate within the principles of Democratic Policing which is an institution that is responsive, respresentive and accountable to its citizens at all times.
The Nigeria Police Force will henceforth, have as its main focus, integrity and accountability as its cardinal operational principle in all its actions and will be decisive on any of its personnel that deviate from its core values.
In order to establish and maintain high standard of behaviour in our official conduct and to eliminate impunity and ensure transparency in the application of the above core values, we will ensure that the following activities will be carried out immediately by this administration: –

1. Responsive Police Institution: – It will be against work ethics henceforth for any Police Commander at any Command level to treat complaints with levity, and complaint received from members of the public must be treated within shorted possible time to the satisfaction of the complainant. This is in line with one of the principles of democratic policing which states that a democratic police institution must be responsive to the yearnings of the community.

3. Strengthening of the Police X-Squads Units to fight corruption amongst civil servants: – In our effort to give a boost to the current administration’s war on corruption, the Police management will strengthen the police x-squad units in the Police Commands with the deployment of thoroughly vetted, selfless and patriotic officers to tackle corruption and abuse of office within the police organization and amongst the Federal, States and local government levels. The personnel deployed to this anti-corruption unit will be supported with incentives to make them more effective in the discharge of their duties.

4. Cheap and Affordable Housing for Ranks and File:- This administration will leave no stone unturned to look into the issue of provision of cheap and affordable accommodation for the police ranks and file to own individually.

6. Payment of Salaries:- Prompt and timely payment of salaries of serving personnel will a cardinal objective to be vigorously pursued by this administration. I promise that we will ensure that the police are not at disadvantaged position compared to other Security Agencies in terms of salaries and other entitlements.

7. Establishment of Forensic Laboratories in the six geopolitical zones in the country: – In order to enhance the investigative capacity of the Nigeria Police, concerted effort will be made to establish at least one police forensic laboratory in each of the six geopolitical zones of the country. This will boost the capacity of the police to effectively and efficiently investigate and prosecute crime within the organization.

8. Establishment of Joint Operation Centres in States Police Commands:- Coordination with other security agencies is very critical at this period of security challenges in the country. Therefore, there shall be established in every Police Command headquarters a joint operation center for effective coordination and synergy with other security agencies to adequately respond to major crises 24/7. This will bring our daily operations closer and will build more trust and confidence amongst us.

10. Reorganization and Restructuring of Special Anti-Robbery Squads:- Violent criminality is gradually taking over our streets, neighborhoods and communities. In order to address these ugly challenges, the Special Anti-Robbery Squads in the State Commands will be restructured, reorganized and made more robust to reverse these ugly trends in our communities. The personnel deployed to these squads will be trained, retrained and motivated accordingly to perform their duties.

11.1 Deployment of Special Units:- Hence forth, deployment of special unit’s personnel to individual businessmen and private companies must be critically reviewed, these units are established to tackle serious security challenges in the country such as riots, terrorisms, and counter insurgency operations. Their deployment will be focused on the locations where we experience the challenges

11.2 Capacity Building: – Efforts will be vigorously pursued to provide capacity to these special units in form of professional training on human rights, use of force, operational deployment procedures and other subjects that are applicable to their duties.

11.3 Housing of Police Special Units in Barracks:- Concerted effort will equally be pursued to ensure the provision of barracks to house all personnel of Police Special Units such as PMF and CTU. This will be a major focus of this administration. This will enhance the effectiveness and efficiency of these units. Housing them in the barracks will enable quick mobilization and will also enhance their cohesiveness as a police striking force.

12. Posting Of Female Officers in Command Positions in States ;- One of the Principles of Democratic policing is a police institution that is responsive, representative and accountable to its citizens. Therefore, because the female population in Nigeria accounts for about fifty percent of the population of this country, emphasis will be in place for the posting of female police officers in command positions. This will boost the morale of female Police officers.

13. Establishment of Eminent Persons Forums in the States of the Federation: – As part of Community policing strategies to tackle ethnic and religious upheavals that have bedeviled several parts of the country,

the Nigeria Police in collaboration with States shall establish Eminent Person’s/ Stakeholders’ forum in every Police Command to help in mediation in to security challenges. The Forum will be composed of retired civil servants, Religious leaders, retired senior security officers and traditional/community leaders. They will assist in mediation and social controls during security challenges in any part of the country. This forum shall meet periodically and reports forwarded to the police headquarters for necessary action. I therefore solicit the support of our elder Statesmen in our various communities to consider this look at this as their contribution to the general peace and stability of the country.

Finally, I wish to call on every citizen of this great country to support and cooperate with the police to make Nigeria safer and more united. As we are all aware, the security of our communities is the responsibility of all of us, I seek the support of every citizen to give the Nigeria Police Force maximum cooperation to ensure that this country shall continue to be more united and prosperous.
Once again I want to thank Mr. President for the confidence and promised to effectively discharge this onerous responsibility.
May Almighty Allah continue to bless this great country and guide the President of the Federal Republic of Nigeria.
Long live Nigeria Police Force. Long live Federal Republic of Nigeria. Thank you and God bless.