Police: Kidnappers of Deputy High Commissioner of Sierra Leone to Nigeria and Others Arrested

In a coordinated operation based on intelligence and technical support, the Intelligence Response Team (IRT) of the Nigeria Police has smashed an eleven man kidnap gang that had for some time now terrorized Kaduna State, the FCT and other North-Central States of Nigeria. 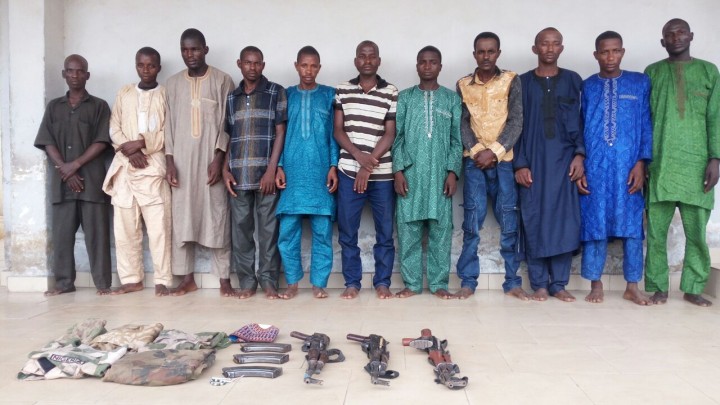 This dare devil criminal gang was responsible for the abduction of the Sierra-Leonean Deputy High Commissioner to Nigeria, Maj. Gen. Alfred Claude-Nelson on June 30, 2016, the Executive Director of Dangote Group and many other high profile kidnap for ransom in recent times.

The modus operandi of these criminal elements includes mounting road blocks on highways in Military uniforms, surprise attack on unsuspecting motorist and relocating from one point to other in the forest with their victims to avoid detection and arrest.

In order to halt the apparent trend in the increase of kidnap for ransom, armed robbery and other anti-social behaviours, the Inspector-General of Police, Ag.IGP Ibrahim Idris, NPM, mni has reorganized the tactical operations teams to tackle crime and criminality throughout the country.

To this end, the Intelligence Response Team (IRT) of the IGP Monitoring Unit, the Nigeria Police on July 2, 2016 carried out tactical surveillance of the Abuja-Kaduna axis and all the adjoining States.

This coordinated operation led to the arrest of eleven members of the notorious gang that has been terrorizing the North-Central States of the country with arms and ammunition recovered from them.

The suspected kidnappers in Police custody are:

Investigations are ongoing and the suspects will be charged to court as soon as it is concluded.

Similarly, the Ag. IGP Ibrahim K. Idris has ordered the same Intelligence based operations throughout the federation to flush out all criminal elements.

Also, the IGP has directed the State Commissioners of Police and Technical/Operation Commanders to improve the response rate on issues of crimes and criminality, assuring law abiding citizens of protection of their fundamental human rights.

Ag.IGP Idris assures all members of the Diplomatic community of their safety and adequate security in Nigeria.

He also reiterated that crime prevention, management and control must be approached from the perspective of collective responsibility.

From the Police Hqtrs.