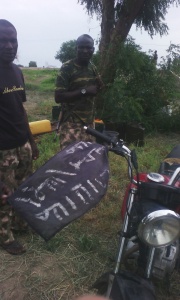 The ambush party decisively dealt with the terrorists riding on bicycles at a crossing point off Damboa-Kubwa road towards Multe village axis. The team killed 1 terrorist, while others escaped with gun shot wounds.

The troops recovered 1 AK-47 rifle with registration number 565907530 and14 rounds of 7.62mm (Special) ammunition, a wooden Dane Gun shaped to the resemblance of an AK-47rifle, 1 fabricated double-barrelled pistol and 4 bicycles.

Also on campaign against Boko Haram:

NTA Documentary from Liberated areas of the North-east:

In a related development, earlier this morning, there was a report of a suspected bag containing Improvised Explosive Devices (IEDs) near ECC premises, which is adjacent to the residence of a former governor of Borno State, Malla Kachalla, along Pompomari bye-pass in Maiduguri. The Nigeria Police Explosive Ordnance Device (EOD) team were immediately called while the military provided outer cordon as the team successfully and safely demobilized the IED bag. 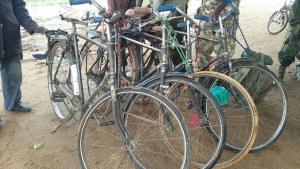 Also recall, Troops of the Nigerian army decapitated another another Boko Haram column at Pulka.

NTA Documentary on the rise of Boko Haram