inno.korieOctober 8, 2016 9:32 pm 0
Troops of 1 Division Nigerian Army involved in the fight against livestock rustling, armed banditry and kidnapping in the northwest geo-political zone of the country, have been recording successes. 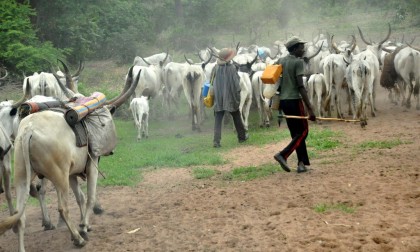 The troops also raided armed bandits camps at Tsannu and Rugga villages in Birnin Magaji and Zurmi Local Government Areas of Zamafara State. In the operation, 2 armed bandits were killed.

Similarly, the troops recovered a pair of military camouflage uniform, a motorcycle, Dane gun and solar panel at one of the camps.

The troops also carried out similar operation at an armed bandits hideout located at Dumburum forest in Zurmi Local Government Area, Zamfara State in which an armed bandit was killed. The team recovered 15 rounds of 7.62mm (NATO) ammunition and 3 Dane guns. The armed bandits camp was also destroyed.

NEWER POSTBreaking: Rice Importation Through The Land Borders Still Remain Banned
OLDER POSTSummary of Monies recovered from some Justices by the DSS