The presidency has donated two presidential aircraft to the Nigerian Air Force to strengthen the military in its anti-terrorism campaign. 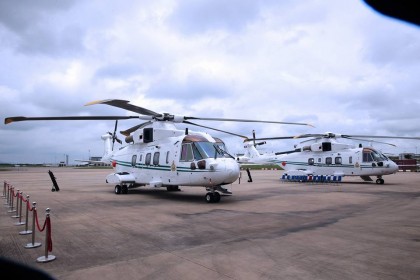 The two Augusta AW101 helicopters were handed over to the Minister of Defence, Mansur Dan Ali at a ceremony in Abuja.

The National Security Adviser (NSA), Major General Babagana Monguno (rtd) on Monday pointed out that the aircrafts handed over to the NAF have ballistic defence capabilities and are equipped with defensive aid suites against certain forms of missile attacks.

The Chief of the Air Staff, Abubakar Sadique appreciated President Buhari and assured that the jets will be used for the right purpose:

“The air ambulance will carry a trauma unit, to ensure that injured troops get immediate medical assistance during airlift. These helicopters are some of the most sophisticated, most comfortable and most equipped in the world.”

“We can’t wait to fly our new aircraft. That’s why we’re all dressed in combat gear.”