Security: How We Are Fighting Terrorism And Pipeline Vandals ~ Service Chiefs 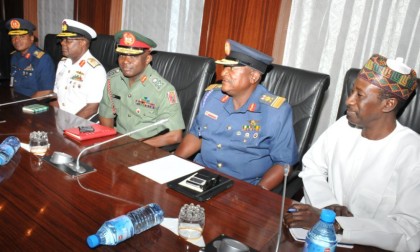 The most populated black nation Nigeria with over one hundred and seventy million people,  bordered by Cameroon, Niger, and Chad is struggling with internal and externally induced security challenges. the shared polarized boundaries  have implications on national territorial defence and externally induced cross border crimes. this prompted president Muhammadu Buhari on assumption of office to embark on diplomatic shuttles to champion bliateral and multilateral cooperation to deal with common security threat, especially terrorism.

This initiative by the  Nigerian government brought back the Multinational Joint Task Force (MNJTF), with it head quarters moved from Borno state to Ndjamena the capital of Chad, under the then Major General Tukur Buratai now chief of army staff. Nigeria still remains the only country to have released about 65% counterpart funding for the force currently headed by a Nigerian, Major General Lamidi Adeosun, other countries only provided troops and are yet to meet their financial obligations.

Back home the security climate is cloudy owing to internal security threats and externally imported global terrorism, the north east of Borno Adamawa Yobe as well as part of north west became epicenter for terrorist activities. Counter terrorism operations lunched from 2009 till date include operation boyona, Zaman Lafiya, and now Lafiya Dole as well as Gaman Aiki in the North East are the tactical and operational levels Military paramilitary and security operatives as well as multi agencies came under the same umbrella since no single service can stop terrorism. Joint military operational strategy gave birth to the decimation of the corridors of the insurgents now at the verge of being defeated.

The recent video released by a faction and fraction of the terror sect in their desperation to seek relevance portends defeatist propaganda to stir up public sentiment and sympathy. Recent support by US, UK, France and other friendly countries are products of efforts of the present administration towards putting the country on the path of peace and progress.

The chief of army staff and the chief of air staff Luitenant General Tukur Buratai and Air Martial sadique Abubakar respectively discuss the military operations so far on the security issues. They both admitted to having Challenges facing the military on tackling the nations insecurity. The chief of army staff talked about the Nigerian army man power challenge in relation to the nations high population, comparing the ratio to that of the 1970’s and 1980’s. The chief of air staff spotted the level of training given to the airforce pilots and also the serviceability of the air-planes as some of the challenges faced by the Nigerian airforce, both the chief of army and air staff praised the efforts of the present government on the support given to the military towards conquering the nations insecurity threat.