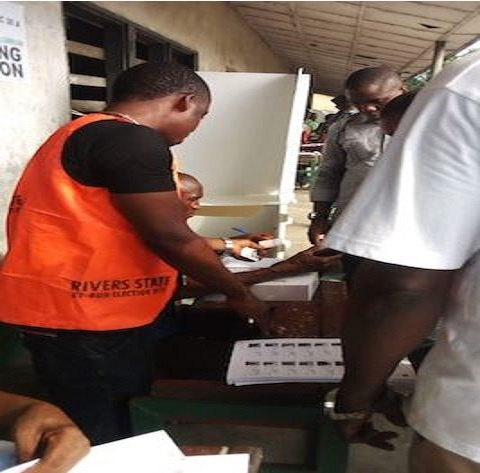 Good afternoon members of the press
You will recall that l had opportunity to interact with you on 10 December 2016 the night of Rivers State Rerun Election. In that interaction, l raised relatable security challenges posed by cultists and militants that continually brutalise security agencies and members of the public in the general area of Omoku, Ujju and other adjoining towns in Ogba/Ndoni/Egbema Local Government Area (ONELGA).

This rift lawlessness in ONELGA was climaxed with the beheading of Deputy Superintendent of Police (DSP) Alkali Mohammed of Mobile Police Unit 48 along with his orderly while the patrol vehicle was taken away with weapons. It was same area that soldiers of 34 Brigade were ambushed on 20 November 2016 where a soldier was killed. Additionally, on 21 November 2016, 4 personnel of NSCDC were killed with their weapons carted away. These attacks were reasonable evidence of breach of law and order. They further evidenced swarming proliferation of arms in the area used to terrorise law abiding citizens.

This local government area has over time witnessed criminal acts ranging from attacks on critical national infrastructure and brutal murder. The acts continued unabated thus the need to ensure clean up of the area for economic prosperity and to provide peaceful environment for the oil companies and law abiding citizens to engage in activities that would earn them a sustainable economic livelihood. The barbaric nature and manners of these criminalities made 6 Division clean up intensification efforts imperative. It was in this regard therefore, that 4 of the suspected criminals camps located across the River in Ujju Town near Omoku were raided on 31 December 2016.

​In the raid operations, 6 Division troops in conjunction with Operation Delta Safe Special Boats Service and air component engaged the suspected criminals in severe exchange of fire in which they were dislodged. This led to arrests of suspects with the displayed ammunition, uniforms and weapons recovered. Furthermore, late DSP Mohammed Alkali with his orderly Sgt Urukwu Nwachukwu AK47 Rifle and uniforms as evidence in the name tag were also recovered.

This cleanup operation was in continuation of efforts by the division to recover, mop up illegally acquired weapons from cultists and militants who do not mean well for our dear nation and refused to embrace Rivers State Amnesty Programme. You may recall that these armed groups have continued to unleash acts of terror in some parts of Rivers State especially in Omoku Area. In the last one-month, 15 people were horrifically murdered with several others kidnapped. Those killed include; a soldier, 4 personnel of the Civil Defence Corps, 2 police personnel and 8 civilians. The gunmen also took away ammunition, vehicles and weapons.

This trend of violence cannot be left unchecked. The Division therefore would sustain operation cleanup of the area for the oil companies and the people to go about their businesses in a peaceful environment. It is envisaged that sustaining the operation would end the senseless observed killings of innocent citizens including security personnel. This would further frustrate illegal arms and ammunition acquisition which would usher secured environment for economic prospects.

The public is hereby enjoined to volunteer credible information that would further give credence to the operation for their collective benefits. Furthermore, I urge law abiding citizens in the State and other parts of 6 Division Area of Responsibility to go about their normal activities. The Division and indeed Nigerian Army in conjunction with other security agencies will continue to support the civil authority in maintaining law and order in line with our constitutional provisions.

Thank you and happy New Year.