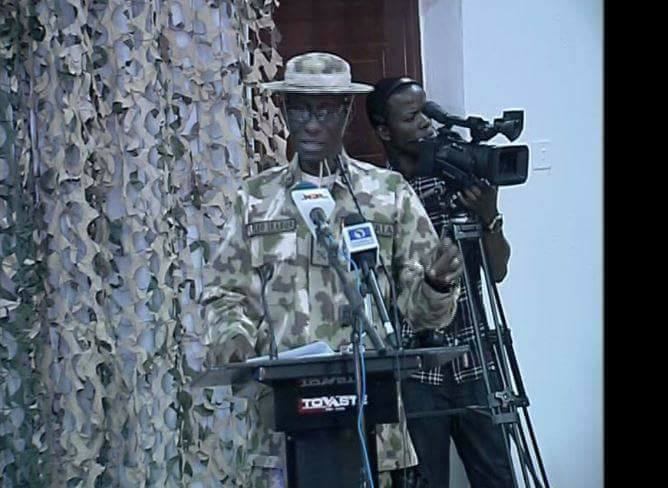 Ladies and Gentlemen, I am most delighted to welcome and to wish you a very Happy Year 2017. It is, no doubt, going to be a good year for us as individuals and as a Nation. On behalf of troops of Op LAFIYA DOLE, I wish all of you happiness, success and prosperity all through the year.

The troops of Operation LAFIYA DOLE have continued exploitation and mop-up operations against fleeing Boko Haram Terrorists (BHTs) with attendant successes. This Brief is thus an update as usual.

The operation in Sambisa Forest and environ is continuing. Our troops are conducting various exploitation and mop-up operations against fleeing BHTs who are in complete disarray. In that regards, some clearance operations were conducted during the period under review:

On 31 Dec 16 at about 0945hrs, own troops conducted clearance operation to AIWA village about 25km from MAIDUGURI. Troops cleared several villages namely: TAULA, MAJAJA, MAFAIDE, JAAJA, MASU KURA and AIWA. No contact was made. However, a mini BHT camp was discovered and destroyed. At AIWA village, villagers were assembled and thoroughly screened which led to the arrest of a suspect named Modu Babagana Goni. The locals informed the troops that the suspect sometimes assists BHT in getting food items. He has been arrested and currently undergoing investigation.

Our troops have arrested some suspected BHT/other criminal elements as follows:

On 25 Dec 16 at about 1000hrs, own troops deployed at FOB POTISKUM apprehended a suspected BHT member Musa Abdullahi at FIKA. The suspect is in custody undergoing interrogation.

On 30 Dec 16 at about 1520hrs, own troops in conjunction with NSCDC arrested a suspected BHT suspect Rabiu Ibrahim at BAJOGA in FUNAKAYE LGA of Gombe State. The suspect fled to GOMBE as a result of the recent attacks on BHT by troops. During preliminary interrogation, the suspect confessed that he joined the sect about 4 years ago and took part in the attack of troops along DAMATURU – MAIDUGURI road. The suspect is in custody for further interrogation.

On 30 Dec 16 at about 1330hrs, our troops arrested a confirmed BHT member at GONI KALLA. While the suspect was being moved from GONI KALLA to DAMATURU, the BHT member attempted to escape by jumping out of the vehicle. He was therefore shot and killed. His corpse has been deposited at General Hospital DAMATURU.

On 25 Dec 16 at about 1330hrs, our troops and DSS personnel trailed 2 suspected high profile kidnappers (Mohammed Ali and Sani Digaru), for an alleged plan to carry out an operation in GOMBE and possibly escape to their camp at Yuga Forest in Bauchi State. The 2 kidnappers were tracked and arrested by DSS in conjunction with troops at SILAS area along Gombe-Dukku road. During the operation, one of the suspects (Sani Digaru) attempted to escape and was shot on the leg and later died in DSS custody. However, the other suspect Mohammed Ali was taken into DSS custody. Items recovered from the suspects include the sum of N28,800.00 only, 3 mobile phones, 2 rings, tobacco, one eye glass, wrist watch and a lighter.

On 2 Jan 17 at about 1920hrs, own troops deployed in NUMAN arrested one Dahiru Saidu who was on transit from LAFIYA – LAMURDE to JADA in Adamawa State. He is suspected to be among the BHT members declared wanted in Serial 164 of Wanted Insurgents Poster circulated in the Theatre. He is in custody undergoing investigation.

On 29 Dec 16 at about 1030hrs, own troops deployed at Cashew Plantation while on patrol around BALE SHUARI intercepted 30 cows. The cows were suspected to have been rustled and separated from BHT due to current military operations at TASUMGANDU. The BHT abandoned the cows and fled on approach of our troops to TASUMGANDU.

On 30 Dec 16 at about 0630hrs, own troops deployed at RANN sprung an ambush operation on some fleeing BHT members where a fire fight ensued. Fifteen BHT members were killed while 4 soldiers were wounded in action. Some of the items recovered from the BHT include 2 AK47 rifles, 4 FN rifles, an M21 rifle, quantity 110 rounds of 7.62mm NATO ammunition, 40 pieces of M21 rounds, 4 FN extra magazines and 2 locally made explosives. Also, on 2 Jan 17, at about 0110hrs, some fleeing BHT members attacked own troops at blocking position in LOGOMANI. The attack was successfully repelled by the gallant troops after a firefight. Several BHT members escaped with gunshot wounds as manifested by several blood stains observed during exploitation during the day.

The residents of DAMASAK have started returning to the town following the re-opening of MAIDUGURI-GUBIO-DAMASAK road on 25 Dec 16. Most of the returnees who were earlier displaced by BHT attacks on the community are returning from either MAIDUGURI or Niger Republic where they had taken refuge. Clearing and sanitation of DAMASAK town has been taking place while troops in conjunction with CJTF continued to dominate general area of the town with aggressive patrol and screening of locals coming into DAMASAK.

Person Borne Improvised Explosive Device Explosion. On 31 Dec 16 at bout 2135hrs, a female suicide bomber detonated her explosive device strapped on her at Customs Area in Maiduguri. She was the only casualty. Also, on 1 Jan 17, at about 0930hrs, own troops in conjunction with CJTF discovered an IED suicide vest that had been dropped by a suicide bomber around GOMARI low cost area. The Nigeria Police EOD Team was contacted and they recovered and detonated the IED vest safely. Again, early this morning at about 0615hrs, 3 female suicide bombers enroute BANKI DUTSE village were gunned down by own troops deployed for an ambush operations. The 3 female suicide bombers were killed in action and no other casualty recorded.

Recall that I hinted earlier that the Cameroonian troops are conducting operations around Ngoshe. On 27 Dec 16, own troops linked up with elements of Cameroonian Forces. The Cameroonian recovered several items from the BHT, which include several weapons of different calibres and their associated ammunition, a Hilux vehicle and motorcycles. Others are generators, batteries, gas cylinders, bomb making materials and building implements. The operation is still ongoing.

Air Operations. The clips of Air ops conducted during the period is as shown.

Update on some Surrendered BHT.

Summary of Arrested BHT Suspects/Rescued Persons. A total of 1,400 civilians were arrested by our troops during all our operations conducted between 28 Dec 16 – 4 Jan 17.

Ladies and Gentlemen, as we start a New Year, I urge all to contribute selflessly to building on the peace process, which we have fought tirelessly to achieve. Please report any suspicious movement of persons and objects to the military or to the nearest security agencies. We shall not rest on our oars until we totally execute the mandate of Op LAFIYA DOLE.

Meanwhile, we in Op LAFIYA DOLE remain grateful to the Commander-in-Chief for all the support and encouragement. Equally, the Chief of Defence Staff, the COAS as well other Service Chiefs are well appreciated for all their leadership and support. To the Media and other Stakeholders, especially the Governments and the good people of the North Eastern States of Borno, Adamawa and Yobe States, I say that your contributions and support are most valued. Remember, ‘We have won the war. We need to win the peace’. Thank you and God bless.