The FCT Administration has refurbished 30 unserviceable vehicles belonging to the FCT Command of the Nigeria Police Force for less than N10 million.

The FCT Minister, Malam Muhammad Musa Bello who commissioned the refurbished vehicles, described the FCT Police Commissioner, Muhammad Mustafa as an exceptional police officer that should be recommended to the highest authorities for this marvelous job.

According to him, “the repairs of all these unserviceable vehicles are not up the cost of one brand new Hilux vehicle in the country”.

His words: “This kind of achievement is the kind of change President Muhammadu Buhari is talking about, because for us to salvage this country, we must return to the maintenance culture we have thrown away”.

Malam Bello reiterated that this indeed is the face of change and that he is highly impressed by this act of the FCT Command of the Nigeria Police Force, particularly its leadership.

The Minister revealed that he sat down with the Police Commissioner where they discussed some of the major challenges of the Command, which is mobility, and that he told him that FCTA cannot afford to buy new vehicles for the Police now but resolved to approve the sum of N9 million to refurbish what can be repaired amongst the rickety ones on ground. 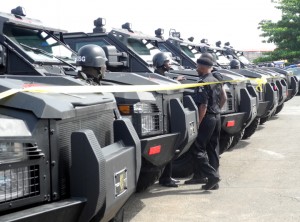 He lamented that public institutions seem not to be taking good care of their assets and promised that since this has been achieved, the next phase would be the renovation of Police Stations across the Federal Capital Territory.

The Minister however charged the Police high command to come back with the idea of having mechanical workshops as it used to be in the past, which could make a lot of difference.

Taking the Minister and the FCT Permanent Secretary, Dr. Babatope Ajakaiye round the refurbished vehicles, the FCT Police Commissioner, Muhammad Mustafa appreciated the N9 million the Minister released to the Police and expressed satisfaction for what that sum has been able to achieve.

The Police Commissioner called on corporate organizations and well-meaning individuals to embark on corporate social responsibility by giving back a little to the society that has done so much for them.

He revealed that the Chinese Embassy has also donated one brand new Honda Car to the Command in addition to the N1 million donated by one hotelier to augment the repairs.