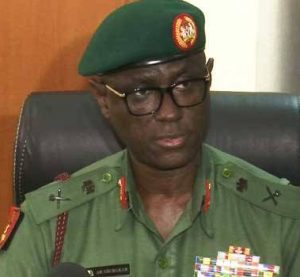 Abubakar gave the order in a statement by Col. Sagir Musa,Deputy Director Army Public Relations, in Awka on Thursday.

He gave directive during his operational visit of the 93 Battalion Area of Responsibility in Taraba.

The GOC said that the visit followed the activities of bandits, armed robbers, kidnappers, cattle rustlers and communal clashes among other menaces within his command.

“We must intensify our efforts to ensure predominance of peace and security in the areas within the unit,’’ he said.

He expressed the appreciation of the Chief of Army Staff, Lt.-Gen. Tukur Buratai, to the soldiers “ for the good work you are doing here”.

“Your hard work and successes are well known to us, we are solidly behind you, because you have done Taraba and Nigeria proud.

“Your success in the recently conducted operation is commendable and I strongly order you to maintain the momentum.

“However, to cap it all, you must capture the fleeing bandit, the terror kingpin, Tawase Agwaza,” the GOC said.

He recalled that on April 3, based on a tip-off, some troops of 93 Battalion and 72 Special Forces Battalion in conjunction with other security agencies recorded success.

The News Agency of Nigeria(NAN) reports that the troops raided some criminal hideouts in a Farm Gbise village bordering Taraba and Benue and recovered lethal items including 3 x AK 47 Rifles with 139 magazines.