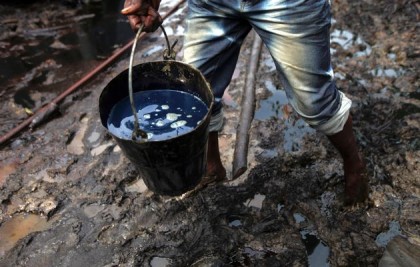 The Nigerian Security and Civil Defence Corps (NSCDC) said it had discovered an illegal refinery, operated in a rented apartment in Sokoto state.

The NSCDC Commandant in the state, Mr Babangida Dutsin-ma, made this known in an interview with the News Agency of Nigeria (NAN) on Friday in Sokoto.

Dutsin-ma said the commandant’s surveillance team discovered the “mini refinery” located in a rented apartment owned by a popular Sokoto businessman, along Bodinga road in the outskirt of Sokoto metropolis.

“The NSCDC anti-vandal team on surveillance detected the centre in which those involved in the adulteration dug a big hole using a large tank in perpetrating the act.

“The ditch is connected to a transformer from which they tap electricity for heating the adulterated products,’’ he said.

The commandant said that the perpetrators of the act fled the scene on sighting NSCDC officials in the area.

He, however, said that the officials confiscated some of the equipment, including jerry cans, empty metal drums, electric cables and containers, used in adulterating the petroleum products.

According to him, preliminary investigation showed that the perpetrators adulterate Premium Motor Spirit (PMS) also known as petrol, and black oil to produce various petroleum products and supply same to unsuspecting consumers.

The commandant, therefore, urged the public, especially people in the area, to assist the command with useful information on any suspicious movements in their communities. (NAN)

NEWER POSTDo Not Succumb To This Intimidation, NLC To EFCC
OLDER POSTAuthorities Say Citizens Of 24 Countries Among Dead, Injured In Barcelona Attack