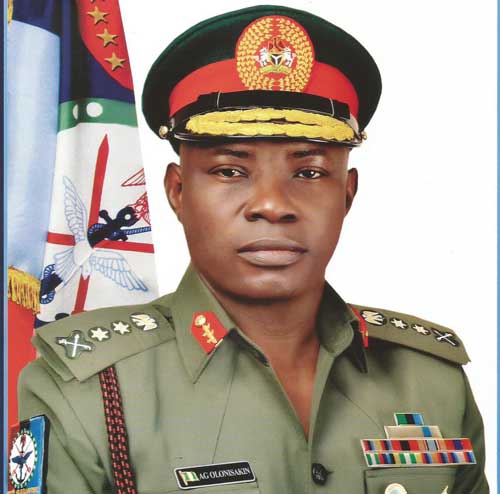 The Chief of Defence Staff (CDS) General Abayomi Gabriel Olonisakin has emphasized that the Nigerian Military has always been guided by the principles of Human Rights protection in all its operations and engagements.  The CDS made this known when the Project Implementation Committee of the National Human Rights Commission (NHRC) and its partners paid him a courtesy call at the Defence Headquarters (DHQ).

Represented by the Chief of Defence Policy and Plans, Air Vice Marshal Bashir Saidu, the CDS assured the team that the Armed Forces of Nigeria would continue to respect  the right of every individual, not only in its operations in the North East but in  every other operations  it is involved.

He said: “the DHQ and the Services have Departments of Civil Military Relations which report directly to the CDS and the Service Chiefs respectively. He added that the military has also established Human Rights Desks in all its formations, units and operational areas across the country. This gesture, he said, was aimed at ensuring that the principles of human rights are strictly adhered to and observed in all its operations”.

Earlier, the Acting Executive Secretary, NHRC, Mrs Oti Anukpe Ovrawah said the team had come to seek  collaboration with the Nigerian Military at both the national and field command levels in Adamawa, Borno and Yobe States in the project aimed at promoting human rights accountability in the prosecution of counter insurgency operations in the States.

In a related development, the Chairman of Arik Airline, Sir Joseph Akinbola Arumemi, has solicited for closer ties with Defence Headquarters on the air lifting of officers and men of the Nigerian Armed Forces, including those on Peace Keeping Operations inside and outside the country.

He made this call when he led a delegation to pay courtesy call on the Chief of Defence Staff, General Gabriel Abayomi Olonisakin (CDS) at the Defence Headquarters Abuja. He noted that the airlines could contribute positively to various Peace Keeping Operations by providing affordable air transportation and better services to the members of the Armed Forces.

Sir Joseph therefore solicited support of DHQ to have confidence in Arik Airline, as an indigenous airline that put safety as its priority.  The CDS, who was represented by the Chief of Policy and Plans, Air Vice Marshal Bashir Saidu; in his remarks, reaffirmed that the military will continue to do It’s best to ensure safety of all Nigerians.