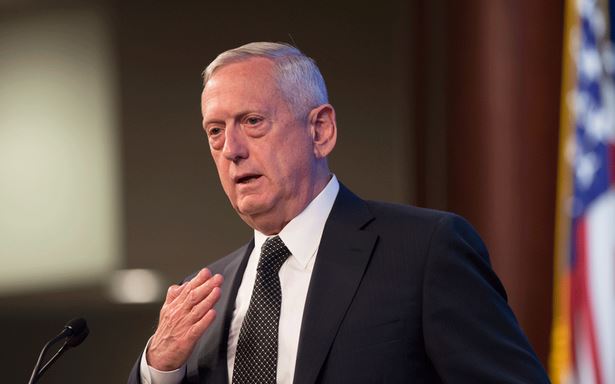 The U.S. military is not in Iraq “to seize anybody’s oil”, Defense Secretary Jim Mattis said, distancing himself from remarks by President Donald Trump before arriving on an unannounced visit to Baghdad on Monday.

Mattis, on his first trip to Iraq as Pentagon chief, is hoping to get a first-hand assessment of the war effort as U.S.-backed Iraqi forces launch a new push to evict Islamic State militants from their remaining stronghold in the city of Mosul.

But he is likely to face questions about Trump’s remarks and actions, including a temporary ban on travel to the United States and for saying America should have seized Iraq’s oil after toppling Saddam Hussein in 2003.

Trump told CIA staff in a January speech: “We should have kept the oil. But okay. Maybe you’ll have another chance.”

Mattis, however, flatly ruled out any such intent. “We’re not in Iraq to seize anybody’s oil,” he told reporters traveling with him.

READ: Nigerian Army Says It WIll No Longer Tolerate Cheap Blackmail From Criminals

Mattis’s remarks are the latest example of his policy differences with Trump. Trump has acknowledged that Mattis did not agree with him about the usefulness of torture as an interrogation tactic but, in a sign of Mattis’ influence, said he would defer the matter to his defense secretary.

Mattis has also taken a dimmer view of Russia and President Vladimir Putin than Trump, saying Moscow sought to break the NATO alliance. On Sunday, Mattis distanced himself from Trump’s labeling of the media as “the enemy of the American people,” saying he had no problems with the press.

A retired Marine general who previously led American troops in Iraq, Mattis has also sought an exemption from Trump’s travel ban for Iraqis who served with U.S. troops, including translators.

He said he had not seen a new executive order which the administration is considering. “But I right now am assured that we will take steps to allow those who have fought alongside us, for example, to be allowed into the United States,” Mattis said