The Federal High Court, Abuja, on Tuesday admitted the leader of the Indigenous People of Biafra (IPOB), Nnamdi Kanu, to bail on health grounds. 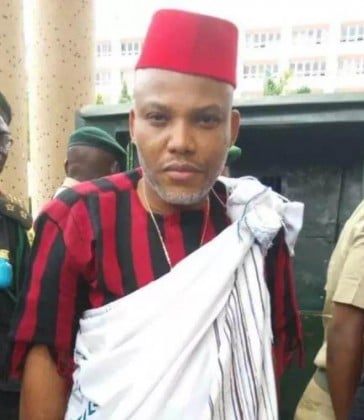 In a brief ruling, Justice Binta Nyako, said that she was convinced that Kanu was ill and needed more medical attention than the Nigerian Prisons was giving him.

“The first defendant, Nnamdi Kanu, has appealed to the court for bail based on health grounds and it is only the living that can stand trial.

“So I am minded to grant him bail so that he can attend to his health and face his trial alive,” Nyako said.

She, however, ordered that while on bail, Kanu must not hold any rallies, grant any interviews or be in a crowd of more than 10 people.

Nyako gave other bail conditions to include three sureties in the sum of N100 million each.

She added that one of the sureties must be a senior highly placed person of Igbo extraction such as a senator.

The judge further ordered that Kanu must deposit both his Nigerian and British passports with the court and that a report on the progress of his health must be made available to her on a monthly basis.

However, she refused bail to the three other defendants standing trial with Kanu, namely Chidiebere Onwudiwe, Benjamin Madubugwu and David Nwawuisi.

The judge maintained that the only reason she admitted Kanu to bail was because of his ill health.

She said that although the charge of terrorism had been struck out against the defendants, the charge of treasonable felony hanging over them was a very serious offence.

She also refused a second application by the three defendants seeking a review of her earlier ruling that witnesses who were security personnel should be protected.

She said although the defendants had made the application for variation of the ruling based on the grounds that the charge of terrorism had been dropped, the charge of treasonable felony was equally a grave one.

Based on this, she said she would stick to her earlier ruling that as long as the witnesses were security personnel, they would testify behind a curtain or wear a mask.

She adjourned the matter till July 11 and 12, for definite commencement of trial.

The News Agency of Nigeria (NAN) reports that Gov. Ayodele Fayose of Ekiti State, and former Minister of Aviation, Mr Osita Chidoka, were in court according to them, as a sign of solidarity with Kanu.

Kanu was arrested in 2015 on an 11-count charge bordering on terrorism and treasonable felony.

Six of the charges, including that of terrorism were struck out early in 2017.

Kanu had also been previously granted bail by Justice Adeniyi Ademola, but was never released.(NAN)