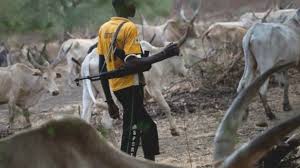 The Spokesman of the Police Command in Benue, ASP Moses Yamu, confirmed the attacks in a statement on Monday in Makurdi.

Yamu said the attacks on Akaa and Tse-Orlalu villages in Mbamar, Ugondo communities, were perpetrated by suspected herdsmen late on Sunday.

He said that the police had yet to establish the motive for the attack and that adequate personnel had been drafted to the villages to restore normalcy.

He said the attackers invaded the villages, killed eight people and injured many others.

Meanwhile, an eye-witness told the News Agency of Nigeria (NAN) on Monday that the herdsmen came in from Taraba State through Abaji and Mbamar in Ugondo community,

“They started first by attacking Akaa village before advancing to neighbouring Orlalu.’’

The eye-witness, who spoke on condition of anonymity, said that several villagers were still missing.

NAN recalls that suspected herdsmen had attacked some communities in the past, including Agatu community, where 10 persons were killed.

Meanwhile, efforts by security agencies and the state government are still ongoing to curtail the restive herdsmen and protect communities.(NAN)