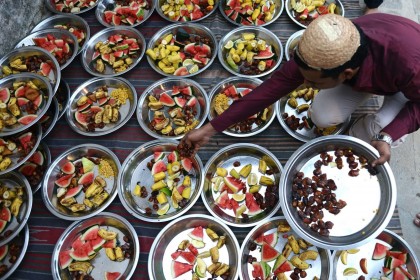 The Kano State Governor, Dr Abdullahi Ganduje has called on Muslims in the state to pray for peace and development of the country during the Holy month of Ramadan.

The governor made the call in a statement by the Commissioner of Information, Youth and Culture, Malam Mohammed Garba and made available to newsmen in Kano on Saturday.

He also called on the people of the state to strictly adhere to the dictates and teachings of Islam during this Holy month of Ramadan.

The governor also urged Muslims to strive to imbibe in greater measure, the virtues of piety, self-discipline, tolerance, justice, fairness and compassion for the less-privileged and fear of Allah in all their undertakings, which the Ramadan fast promotes.

He said fasting, which is one of the five pillars of Islam, should not be just a period for abstaining from food and drink, but also be used to make greater sacrifice by praying fervently for peace, security and rapid socio-economic development of the state and the country in general.

Ganduje also called for special prayers for the speedy recovery of President Muhammadu Buhari, who is currently in United Kingdom for medical treatment.

He then wished all Muslims a successful and spiritually gratifying Ramadan fast.

Muslims across the country began the Ramadan fast on Saturday, May 27, following announcement of the sighting of the new moon in some parts of the country on Friday. (NAN)