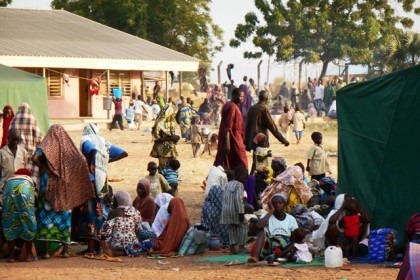 The Yobe Government, says it has cleared 1,000 hectares of land to re-engage over 500 Internally Displaced Persons (IDPs) into farming.

The Commissioner for Agriculture, Alhaji Mustapha Gajerema, said this on Thursday in Damaturu, while inspecting newly procured farm implements.

He said that the government had procured tractor spare parts, tyres, plough discs, thrashers and other equipment worth N38 million to boost agricultural production in the state this cropping season.

Gajerema said that the government would provide the IDPs with improved seeds and fertiliser to support their efforts to engage in food production so as to boost the state’s food security and economic recovery.

He urged the IDPs to use the opportunity, which the government had provided for them, to facilitate their economic recovery and rehabilitation.

He said that the refurbished tractors would be deployed to every part of the state to serve the people.

“Agricultural production is the major occupation of our people; government will support the people with every necessary input to promote agriculture in the state.

“This administration is giving agriculture a very high priority and will support both rain-fed and irrigation farming activities in the state,’’ he said.

Gajerema urged the management of the state Agricultural Development Programme to ensure the proper use of the equipment, while remitting of all the revenue accruing from it into the government coffers. (NAN)