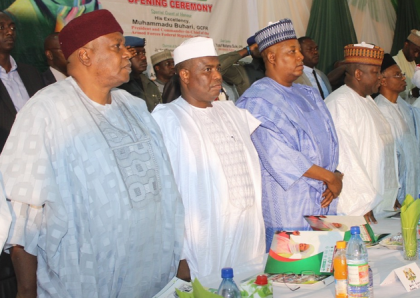 The Northern States Governors Forum has set up a 12-man committee to come up with the region’s position on Nigeria’s restructuring.

A communiqué issued after a two-day meeting of the governors in Kaduna on Friday said Gov.  Aminu Tambuwal of Sokoto State would serve as Chairman of the committee with the Deputy Governor of Plateau as Secretary.

Other members of the committee include the governors of Nasarawa, Gombe, Benue, Bauchi and Kaduna States.

It also has as members, the Emirs of Kano, Zazzau and Gummi, as well as Estu Nupe and Gbong Gwom Jos.

The committee was mandated to collate opinions from across the region and come up with acceptable, tenable and sustainable position for the North in consonance with provisions of the Constitution.

The forum re-affirmed its commitment to national unity and peaceful co-existence, assuring that all Nigerians have the right to reside and own property in any part of the region.

The governors further reassured all Nigerians living in the North of adequate protection of their lives and property.

The forum also called on Southern leaders to emulate the gesture.

The northern governors urged the Federal Government to strengthen the capability of the Police and other security agencies to perform their duties more effectively.

They noted that the lingering crisis between farmers and herdsmen was as a result of lack of adequate security enforcement.

“The situation is worsened by the infiltration of criminal elements from outside the regions that pose as Fulani herdsmen and deliberately engage farmers in deadly conflict and crimes.’’

The forum emphasised the need to create more grazing reserves with adequate structure to address the needs of herdsmen and their animals before the enactment of any legislation on open grazing. (NAN)