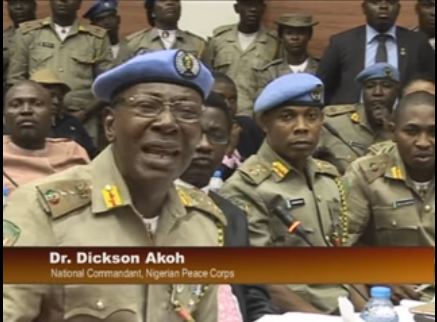 Police: Why The Peace Corps Office is Still Shut

NAN: The Nigeria Police Force said the office of the Peace Corps of Nigeria in Jabi, Abuja remains shut because the order proscribing the existence and operations of the organisation is still in force.

The police made the clarification in a statement on Tuesday following innuendos and misinformation created by some media reports.

A Federal High Court recently ruled that the office be opened.

But the police said they have appealed the judgment and filed a stay of execution. They said they took the steps “in the interest of National Security and Public Safety”.

The statement by Jimoh Moshood gave a background into the police-Peace Corps affair:

“It is incumbent on the Nigeria Police Force to inform the public that on the 28th February, 2017, the personnel of the Nigeria Police Force in a Joint Operation with the personnel of the Military and the Department of State Service embarked on an operation to halt and rid the country of illegal/unlawful security outfits constituting National Security Threats, Threats to Protection of Lives and Properties of Nigerians across the country and those illegal security outfits found engaging in obtaining money and properties under false pretence, Advance Fee Fraud and wide spread extortion of huge sums of money from thousands of unwary Youths and their parents/Guardians throughout the country under the guise of recruitment.

“However, it has been observed that some of these proscribed illegal security outfits and the Peace Corps of Nigeria are still operating outside the mandates and purposes for which they were registered by the Corporate Affairs Commission.

“ It is in furtherance of the above that the Nigeria Police Force, the personnel of the Military, Department of State Service, had in a joint security operation entered the Head office of the Peace Corps of Nigeria on the 28th February, 2017 situated opposite Jabi Lake, Utako District, sealed off the building and effected the arrest of one Mr. Akor Dickson, the Leader of Peace Corps of Nigeria and Forty Nine (49) others for investigation in the interest of public safety and security. They were promptly arraigned in court for prosecution on criminal offences of Obtaining Money and Property under false pretence, Operating illegal Security Outfit, Money laundering, Advance Fee fraud and other related offences which are still pending before the Federal High Court, Abuja.

” It would be recalled that on the 14th of April, 2011, the Peace Corps of Nigeria under the same Akor Dickson, prior to the Presidential Election in 2011, with brazen impunity and total disregard to the laws of the Federal Republic of Nigeria and the Electoral Act did deploy some of its personnel for the conduct of the General Election, but were prevented by the Nigeria Police Force and other security agencies from functioning as a security outfit or disguising as Election Observer/Monitoring Group covering the Election.

“The Nigeria Police Force wishes to assure all and sundry that the Force is a law-abiding organization and will definitely obey the outcome of the appeal pending determination in Court and the exhaustion of all legal processes in this matter.