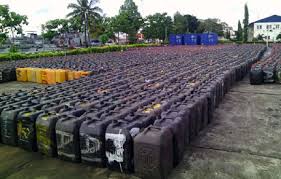 55,000 Litres of Petrol Intercepted by Custom at Seme Border

The controller in a statement by the PRO said that most of the seizures were made at Pashi-Yekeme Community in Owode and the creeks.

Aliyu said that the command was determined to combat the smuggling of petroleum products usually done by the smugglers using jerry cans and passing through the creeks and illegal routes.

He said that they were not banning the use of trucks to transport the products to the communities along the border where they were legitimately meant to serve as was being wrongly and widely speculated by some people.

The controller explained that smuggling of petrol in jerry cans had been a recurring decimal which operatives of the NCS had always tried to suppress.

“This has been our modest contribution toward ameliorating the sufferings of Nigerians caused by the current shortage of the product,’’ he said.

Aliyu said that the command had always and would continue to enforce her statutory mandate of revenue generation, suppression of smuggling and facilitation of legitimate trade.

He said the command would also continue to protect the international land border against illicit smuggling and trafficking of small and light weapons across the border along the West African sub-region.

Aliyu said that the NCS operational norms did not allow trucks of petroleum products to cross the Nigerian territory either through the Seme main border or its Owode-Apa Outstation.

“This is because all loaded trucks with petroleum products meant for Seme axis are strictly monitored and documents provided are carefully scrutinised in order to avoid diversion.

“It is also to equally ensure that the products meant for the axis are actually discharged strictly at the approved filling stations along Seme main border or Owode-Apa border communities,’’ the controller said.

Aliyu said that officers of the anti-bunkering unit were always assigned to escort all loaded incoming trucks to ensure strict compliance in discharging the products to the approved filling stations in the border communities.

“The surveillance becomes inevitable because Nigerians who reside along the borders have the right to be served with the product for their local economic activities,’’ he said.

The controller said that officers of the command would continue to patrol every nook and cranny of the border to ensure that the products were discharged to where they were legitimately meant for.

He said that officers of the command would continue to apprehend individuals who might attempt to smuggle the product out through the creeks or the illegal routes at night and seize the products.

The controller said that the present leadership of the NCS led by Retired Col. Hameed Ali “is ready to bring all erring officers who circumvent government’s efforts, to face the consequences of their actions’’.

Aliyu warned all smugglers and perpetrators of the illicit act to desist from it.

He said that they would be made to face the full wrath of the law if they were caught, saying others caught were being prosecuted.